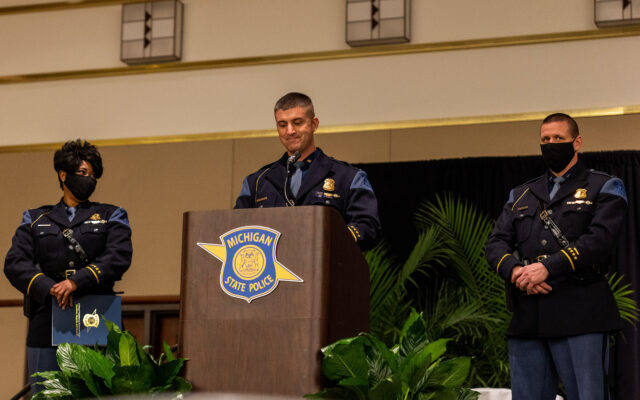 During a ceremony Thursday, Michigan State Police (MSP) Director Col. Joe Gasper and members of his Leadership Team honored and celebrated approximately 60 department members who have earned promotion, achieved 35 years of service or been awarded other special recognitions.

“It makes me incredibly proud to hear about the selfless and positive acts our members are engaged in every day across our state,” stated Gasper. “The commitment of our enforcement and civilian members to providing service with excellence, integrity and courtesy ensures our fellow Michiganders feel supported and safe in their communities.”

The Citation for Meritorious Service is awarded for service rendered in the line of duty when a member, because of diligence and perseverance, performs difficult tasks under unusual circumstances and goes beyond that which is normally expected of most members where crime is prevented, life and property is protected, or criminals are apprehended. This award was bestowed on Spl/Sgt. Donald Pasternak, currently of the Special Operations Division but previously assigned to the Brighton Post, in recognition of his investigative perseverance over a period of several years on a criminal sexual conduct case involving a minor. In September 2021, seven years after the investigation began, a jury found the assailant guilty of CSC in the first degree.

The Citation for Bravery is awarded when a member knowingly performs an act in the line of duty which endangers or exposes him or herself to serious injury and when, because of the nature of the action, a life may be saved, a serious crime prevented, or a person arrested who has committed a serious crime. This award was bestowed upon Tpr. Eric Morrow, of the First District, for his response to a head-on traffic crash on US-127 in Ingham County that occurred in August 2021; Tprs. Elie Awad and Trevor Rogers, of the Lakeview Post, for their response to an armed subject who fired upon law enforcement; Tpr. Jacob Strong, of the Alpena Post, for the safe rescue of two persons trapped inside a burning home; and Tpr. Jason DeVries, of the Niles Post, who was shot while conducting a traffic stop.

The Community Policing Outstanding Achievement Award recognizes an innovative initiative developed to promote teamwork to help solve a community issue. This award was bestowed upon the Flint Post for its “Building Up the Block” program, an innovative community policing initiative developed and implemented in 2021. The idea came from a group of troopers who had a vision for creating a new type of outreach program that would help to build comprehensive community relationships and reduce violent crime. The Marshall Post received an Honorable Mention for its efforts to add life-saving safety lighting to Amish buggies.

The Colonel Etue Community Impact Award recognizes leadership, commitment and personal involvement in building positive police-community relations. The award was bestowed upon Lt. Andrew Stoner, of the Jackson Post, who created a program for young adults in the Jackson community modeled after a career preparedness program for our enlisted members, which is called Plan-Prepare-Perform. Tpr. Donald Stewart, of the Monroe Post, received an Honorable Mention for the creation of the “Train Like a Trooper” program, which uses physical training and leadership lessons to encourage high school athletes to find the courage within themselves to be leaders.