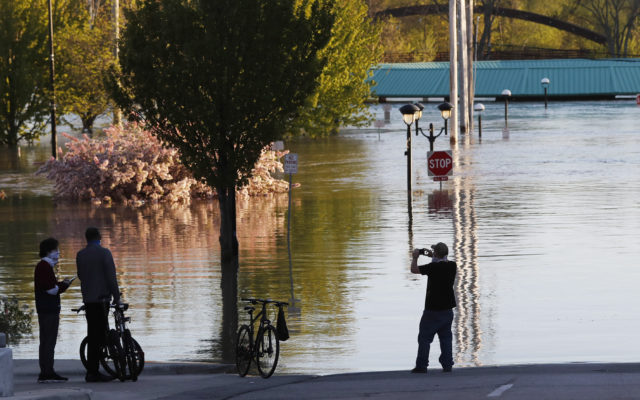 People photograph the floodwaters of the Tittabawassee River that encroached on downtown Midland, Mich., Wednesday, May 20, 2020. (AP Photo/Carlos Osorio)

LANSING – Michigan regulatory agencies filed a lawsuit today seeking compensation, civil fines, and the cleanup and restoration of damages caused by Boyce Hydro’s negligence in the failure of the Edenville and Sanford dams last month.

The eight-count suit will be followed by a motion to compel Boyce to immediately comply with a state order to fully inspect potentially dangerous cracks and erosion in a damaged portion of the Edenville Dam that is still standing to determine what steps must be taken to protect public safety.  The company’s response to the May 22, 2020 emergency order has been much too slow.

It also compels Boyce to repair damages to Michigan’s natural resources, clean up discharges of debris and hazardous materials caused by the dam failures, and pay civil fines and damages related to the disaster.

“This suit seeks to hold the dam owners accountable for the damage they caused and recoup the money the taxpayers have spent responding to the ongoing emergency created by this devastating flood,” said Michigan Attorney General Dana Nessel. “We know the owners of the dam, with their long history of neglect, are responsible for the dam’s failure. We can see already the devastating results of their inaction. This suit seeks an order requiring the dam owners to pay to remediate the harm they caused, and to take action to ensure it does not occur again.”

Federal regulators identified deficiencies at the dam as early as 1993. Those deficiencies were well known to Boyce at the time they purchased the dam in 2004. Boyce repeatedly failed to comply with orders by the Federal Energy Regulatory Commission (FERC) to upgrade the dam through 2018, when the Commission revoked the company’s permit to generate hydroelectric power.

The dam’s spillway capacity was just one of those deficiencies. “Thirteen years after acquiring the license for the project, the licensee has still not increased spillway capacity leaving the project in danger of a [probable maximum flood] event,” FERC wrote in a 2017 compliance order. “The licensee has shown a pattern of delay and indifference to the potential consequences of this situation. A situation that must be remedied in order to protect life, limb, and property.”

The license revocation shifted regulatory oversight to the state of Michigan in late 2018. The State was working to both ascertain the dam’s compliance with state safety standards (which differ from federal standards) and to facilitate the transfer of ownership to a group of local stakeholders. Those stakeholders, organized as the Four Lakes Task Force, had a plan in place to upgrade the dam’s spillway capacities, strengthen its embankment, and make other repairs so it could regain the federal hydroelectric generating license.

The transfer of the dam to the Four Lakes Task Force was imminent when the failure occurred, and—as the dam owners’ resistance to FERC demonstrates—was a much faster path to improve safety than attempting to directly compel the private owners through regulatory means to undertake the repairs.  That process could have taken close to a decade to complete, but the Task Force’s construction schedule was already underway at the time the dam failed. The state was providing technical assistance and a $5 million grant to assist in the repairs and the transfer of ownership to the Task Force.

“Recently, progress toward modernizing the dam appeared to be moving forward,” said Liesl Clark, EGLE director. “Tragically, it was not soon enough. At any point in the preceding 15 years, Boyce could have chosen to abide by federal orders and bring the dam into compliance. Unfortunately, they refused to make the improvements necessary to retain their federal license.  EGLE, in partnership with federal and local officials, will now proceed with addressing the heartbreak and loss for thousands of Michigan residents who are victims of the dam’s failure.”

Damage to lives, property, and the natural resources of the state are extensive, and are still being tallied. But there is clearly enough evidence even at this early stage of the aftermath that Boyce is responsible for the catastrophe.

“Residents on and near Wixom and Sanford lakes formed by the Edenville and Sanford dams, respectively, should be swimming, fishing and boating today instead of recovering debris and staring at mud pits where their lake used to be,” said Dan Eichinger, DNR director. “The wetlands, wildlife and aquatic organisms that are the base of a healthy ecosystem have been destroyed.“

Eichinger, Clark and Nessel said the negligence is a pattern for Boyce, which illegally drew down winter lake levels in 2018 and 2019, harming wetlands and aquatic creatures. Eichinger bristled at the suggestion – made by Boyce’s lawyers – that state regulators demanded any change in the legal summer lake level, which is set by the local circuit courts.

“Boyce themselves sought, and received, permission to elevate Wixom Lake to its legally-required summer level this spring,” said Nessel. “The State did not demand that the level be raised. Boyce has not pointed to any evidence it ever raised the alarm that the summer level posed a risk, and it never took action to seek a lower summer level with EGLE or the courts. Their after-the-fact attempt to rewrite history in the press is pure fantasy.”

A copy of today’s filing is available here.