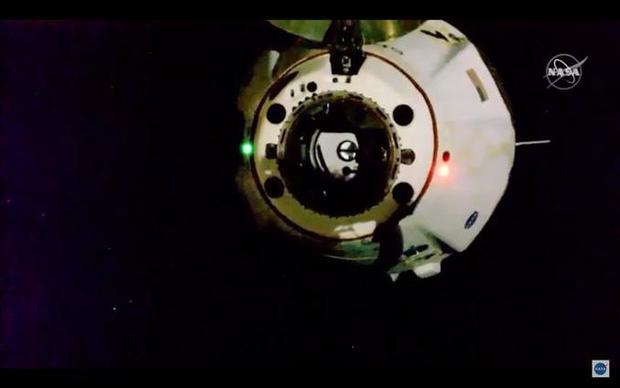 “It’s been a great two months, and we appreciate all you’ve done as a crew to help us prove out Dragon on its maiden flight,” Hurley radioed station commander Chris Cassidy as the SpaceX capsule departed. “We look forward to splashdown tomorrow.”

“It’s been a real pleasure,” Cassidy replied, “it’s been an honor to serve with you. Safe travels and have a successful landing. Endeavour’s a great ship. Godspeed.”

It will be the first splashdown for U.S. astronauts in 45 years and the first entry, descent and landing of a piloted Crew Dragon spacecraft, one of the final steps before NASA can certify the SpaceX ferry ships for operational six-month flights to the space station.

“The hardest part was getting us launched. But the most important part is bringing us home,” Behnken said during a departure ceremony earlier Saturday.

“I look forward to the test objectives of not only separating from the International Space Station smoothly, but then coming down to a nice splashdown off the Florida coast to come full circle with bringing that capability to launch astronauts again to the United States.”

With favorable weather also expected at a backup landing site near Panama City, Hurley and Behnken undocked from the space station’s forward port at 7:35 p.m., leaving Cassidy and crewmates Anatoly Ivanishin and Ivan Vagner behind.

Pulling smoothly away from the space station, Hurley and Behnken planned to monitor a series of computer-orchestrated thruster firings to fine-tune the ship’s orbit before going to bed around 11:40 p.m.

Getting up for their final day in space at 7:40 a.m. Sunday, the astronauts will work through a detailed pre-entry checklist before the Crew Dragon jettisons its no-longer-needed trunk section at 1:51 p.m., exposing the capsule’s protective heat shield.

Then, starting at 1:56 p.m., the Crew Dragon’s forward thrusters are scheduled to fire for 11 minutes and 22 seconds, slowing the craft by about 168 mph, just enough to drop the far side of its orbit deep into the atmosphere.

A half-hour later, approaching the Gulf of Mexico from the southwest, the Crew Dragon is expected to plunge back into the discernible atmosphere, quickly slowing down as the heat shield endures temperatures higher than 3,000 degrees. Small drogue parachutes will then stabilize the capsule before four main parachutes unfurl at an altitude of about 6,000 feet.

Splashdown near Pensacola is expected at 2:48 p.m.

The SpaceX recovery ship Go Navigator will be stationed nearby carrying medical personnel, support crews and initial responders with “fast boats” who have trained to reach the spacecraft within minutes.

Within the hour, they are expected to stabilize and “safe” the capsule, haul it on board the Go Navigator, open the side hatch and help Hurley and Behnken out as they begin re-adjusting to gravity after two months in space.

Both astronauts said they expect a bit of nausea and possibly vomiting as they bob about in the capsule awaiting recovery. During an earlier interview aboard the station, Hurley joked, “there’s a pretty good likelihood that we may see breakfast twice on that particular day.”

In any case, after initial medical checks aboard the the recovery ship, the astronauts will be flown by helicopter to a nearby airport where a NASA jet will be waiting to fly them back to the Johnson Space Center in Houston for debriefing and reunions with family members.

Since the space shuttle’s retirement in 2011, NASA has relied on Russia’s Soyuz spacecraft to ferry U.S. and partner agency astronauts to and from the station at some $80 million per seat.

SpaceX launched and recovered an unpiloted Crew Dragon capsule last year and carried out a dramatic in-flight abort, again unpiloted, earlier this year. That cleared the way for Hurley and Behnken to blast off on the program’s first piloted mission, a test flight known as Demo 2, on May 30.

“The DM-2 test flight is in some ways just two thirds complete,” Hurley said Saturday. “We did the ascent, the rendezvous and the docking, we completed our docked objectives and now is the entry, descent and splashdown phase.”

During the departure ceremony, Cassidy presented Hurley and Behnken with an American flag the crew of the final shuttle mission left aboard the lab complex in 2011. Hurley was the pilot of shuttle Atlantis for that final flight and “capturing the flag” marked a special moment.

The flag first flew in space aboard Columbia during the first shuttle mission in 1981 and if all goes well, it will be aboard NASA’s Orion capsule during a flight to the moon in the next few years.

“This flag has spent some time up here, on the order of nine years since we dropped it off on STS-135,” Hurley said. “So very proud to return this flag home and see what’s next for it on its journey to the moon.”

Also coming home is “Tremor,” the toy dinosaur that served as an ever-present zero-gravity indicator during the crew’s stay aboard the station. It was given to them by their sons, six-year-old Theo Behnken and 10-year-old Jack Hurley.

“My son and Doug’s son are really excited, not only to get their fathers back, but to get our apatosaurus, our zero-G indicator that they nominated to go with us on this historic mission,” Behnken said. “For Jack and Theo: Tremor, the apatosaurus, is headed home soon and he’ll be with your dads.”

Both men are married to astronauts. Hurley’s wife, Karen Nyberg, is retired from the astronaut corps, but Behnken’s wife, Megan McArthur, is in training to fly to the space station next year aboard the same Crew Dragon bringing her husband home Sunday.