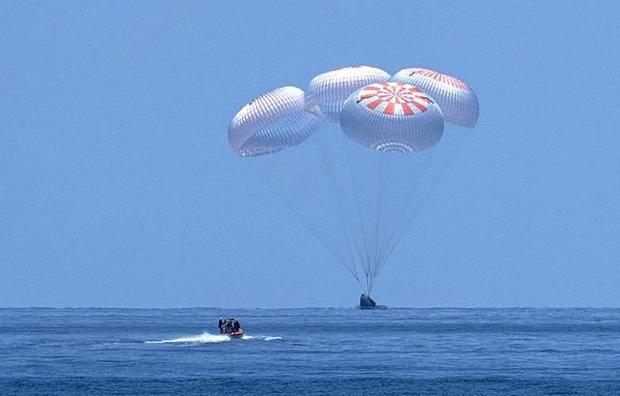 Astronauts Douglas Hurley and Robert Behnken, strapped into a SpaceX Crew Dragon capsule wrapping up its first piloted test flight, plunged back to Earth on Sunday with a fiery reentry to splashdown in the Gulf of Mexico to close out an historic 64-day flight.

Descending under four large orange-and-white parachutes, the Crew Dragon — named Endeavour by the astronauts — settled to a 15-mph impact about 39 miles south of Pensacola, Florida, at 2:48 p.m. ET.

“Endeavour, on behalf of the SpaceX and NASA teams, welcome back to planet Earth, thanks for flying SpaceX,” radioed SpaceX engineer Mike Heiman.

“It was truly our honor and privilege to fly the (inaugural) flight of the Crew Dragon Endeavour,” Hurley replied. “Congratulations to everybody at SpaceX.”

A few hours later, on hand to help welcome the astronauts back home in Houston, SpaceX founder Elon Musk said the flight marked a new chapter in human spaceflight.

And, perhaps, a few prayers.

“I’m not very religious, but I prayed for this one,” said Musk, clearly thrilled by the successful flight.

Hurley and Behnken, both shuttle veterans, joked about getting nauseous and possibly throwing up while bobbing in the Crew Dragon awaiting recovery. But the landing zone provided the mildest of sea states with low, gentle waves and light winds.

Fast response crews in speed boats raced to the capsule, floating upright, within minutes of splashdown to prepare the craft for a lift to the deck of the SpaceX recovery ship Go Navigator.

To NASA’s dismay, numerous pleasure boats were on hand as well, surrounding the recovery team shortly after splashdown. At least one motored past displaying a large Trump for president flag.

“Something like this can really endanger the whole thing,” said NASA commentator Dan Huot.

NASA Administrator Jim Bridenstine said the Coast Guard was on hand to clear the area for splashdown, but once the Crew Dragon was in the water, “the boats just came in. We need to do a better job next time, for sure.”

In a statement, the Coast Guard said the public was warned to keep out of the splashdown zone, but “numerous boaters ignored the Coast Guard crews’ requests and decided to encroach the area, putting themselves and those involved in the operation in potential danger.”

“The actions of those boaters today were not representative of the average boating community. … A comprehensive review of this operation will be conducted between the Coast Guard, NASA and SpaceX and the development of lessons learned will be our next priority moving forward.”

Despite the unexpected intrusions, the SpaceX recovery team quickly latched onto the capsule and hauled it aboard the Go Navigator. Because trace amounts of residual propellant vapor were detected near the spacecraft, the team held up opening the Crew Dragon’s hatch while the system was purged.

But about an hour and 10 minutes after splashdown, the hatch was finally opened and Behnken and Hurley, still wearing their spacesuits, were helped out, put on stretchers and rolled away for initial medical checks. Both men were in good spirits as they began their readjustment to gravity after two months in weightlessness.

“I just want to thank you guys for bringing us home safe before I disembark from the good ship Endeavour,” Behnken radioed flight controllers in SpaceX mission control. “Thank you for doing the most difficult parts, and the most important parts, of human spaceflight — getting us into orbit and bringing us home safely.

Along with bringing Hurley and Behnken back to Earth, the Crew Dragon brought home more than 330 pounds of mostly-frozen research specimens and samples.

Also on board: an American flag that Hurley’s shuttle crew left aboard the space station during the final orbiter’s final mission in 2011. The flag first flew in space during the shuttle program’s maiden voyage in 1981 and will fly to the moon in the next few years aboard an Orion capsule as part of NASA’s Artemis program.

After initial medical checks, the astronauts boarded a helicopter for a short flight to Pensacola where a NASA jet was waiting to whisk them back to the Johnson Space Center in Houston for debriefing and reunions with their families. They were welcomed by Bridenstine, Musk, senior space program managers and enthusiastic Johnson Space Center workers.

“I’m happy you went into space, but I’m even happier that you’re coming back home,” Hurley’s son, 10-year-old Jack, said in a morning wakeup call to the crew.

“Wake up! Daddy, wake up!” called 6-year-old Theo Behnken. “Don’t worry, you can sleep in tomorrow. Hurry home so we can go get my dog!”

With splashdown Sunday, Hurley and Behnken closed out a mission spanning 64 days, four hours and 25 minutes, covering 1,024 orbits and 27 million miles since launch from the Kennedy Space Center atop a SpaceX Falcon 9 rocket on May 30.

During his stay aboard the station, Behnken joined Expedition 63 commander Chris Cassidy for four spacewalks, moving the Crew Dragon astronaut up to number four on the list of the world’s most experienced spacewalkers with 10 outings totaling a combined 61 hours and 10 minutes.

The Crew Dragon is the first spacecraft built in America and launched from U.S. soil since the space shuttle was retired after 30 years of service and 135 flights. For the past nine years, NASA has relied on Russia’s Soyuz spacecraft to ferry U.S. and partner agency astronauts to and from the station at some $80 million per seat.

SpaceX launched and recovered an unpiloted Crew Dragon capsule last year and carried out a dramatic in-flight abort, again unpiloted, earlier this year. That cleared the way for Hurley and Behnken to blast off on the program’s first piloted mission, a test flight known as Demo 2.

The spacecraft has performed in near-flawless fashion throughout its first piloted mission and a successful landing was the last major hurdle before NASA can certify the spacecraft for operational crew rotation missions to and from the space station.

If all goes well, a Crew Dragon will carry three NASA fliers and a Japanese astronaut to the International Space Station this fall. The Crew Dragon that landed Sunday will be refurbished and launched again next year with another four-person crew, including Behnken’s wife, astronaut Megan McArthur.

Hurley and Behnken began the trip back to Earth on Saturday evening when they undocked from the International Space Station’s forward port. With tropical storm Isaias churning up Florida’s eastern coast, mission managers targeted splashdown for the Gulf of Mexico where near-ideal weather was forecast.

With Hurley and Behnken monitoring the automated re-entry sequence, the Crew Dragon’s no-longer-needed aft trunk section was jettisoned, exposing the capsule’s heat shield, a few minutes before an 11-minute 22-second firing of the spacecraft’s forward thrusters at 1:56 p.m.

Moving through space at more than 17,000 mph, the deorbit rocket firing was designed to slow the craft by about 168 mph, just enough to drop the far side of its orbit deep into the atmosphere.

Approaching the Gulf of Mexico from the southwest, the Crew Dragon slammed into the thick lower atmosphere around 2:36 p.m., its heat shield enduring temperatures up to 3,500 degrees as the ship rapidly decelerated in a blaze of atmospheric friction.

Eight minutes later, stabilizing drogue parachutes popped out, followed a minute later by the four main chutes, slowing the ship’s descent to a much more sedate 15 mph or so. Splashdown came on time 2:48 p.m.

The SpaceX recovery ship Go Navigator left port early Sunday and was on station for splashdown. One of the ship’s two generators failed before leaving port, but mission managers said no impact was expected and the ship appeared to operate normally throughout the recovery.