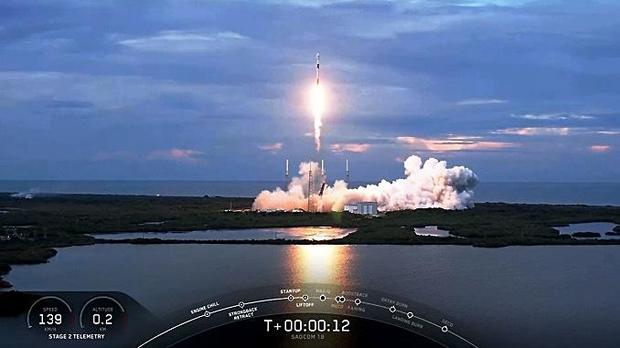 The first of two planned back-to-back SpaceX Falcon 9 launches was called off Sunday because of bad weather, but the company succeeded later in the day, taking advantage of improving conditions to launch an Argentine remote sensing satellite on a spectacular trip to an orbit around Earth’s poles.

It was the 100th flight of a SpaceX rocket since 2006, the 92nd for the Falcon 9 family, and the first since 1969 to send a rocket from Cape Canaveral on a southeasterly trajectory, flying over Cuba on the way to the polar orbit required by its satellite payload.

Adding to the drama, the Falcon 9’s previously flown first stage flew itself back to a pinpoint landing at the Cape Canaveral Air Force Station, rocking the Space Coast with twin sonic booms heard as far away as Orlando. It was only the second Florida landing out of 12 recoveries so far this year, SpaceX’s 59th overall.

Moonwalker Buzz Aldrin watched the launch from his home a few miles south of the Air Force station, tweeting “well done @SpaceX” for a landing “in my backyard.”

Leading off the Sunday flight plan was a Falcon 9 set to carry 60 Starlink internet relay satellites into space from historic pad 39A at the Kennedy Space Center. The SAOCOM 1B mission would follow suit from the nearby Air Force station.

But the Starlink booster was not hauled out of its hangar until early Sunday, and SpaceX later said in a tweet the team had called off the launch attempt “due to inclement weather during pre-flight operations.” The next opportunity to get the Starlinks off the ground is Tuesday at 9:29 a.m.

The weather appeared no-go most of the day for the SAOCOM 1B flight, but storms diminished as the day wore on and by the time the second launch window rolled around the Falcon 9 was cleared for takeoff.

The mission got underway at 7:18 p.m. when the booster’s nine first stage engines ignited, throttled up to full thrust and propelled the rocket away from pad 40 under a still-cloudy sky. Joining the Argentine satellite in the rocket’s nose cone were two small hitch hiker satellites added to the flight under a “rideshare” arrangement.

All earlier Falcon 9s launched from Florida climbed away to the east or northeast. To reach a polar orbit from Cape Canaveral, the SAOCOM 1B Falcon 9 took off on a southeasterly trajectory and then carried out a “dogleg” maneuver once clear of Florida’s coast to bend the flight path more directly south.

In 1960, falling debris from a malfunctioning rocket reportedly killed a cow in Cuba, prompting protests in the island nation. All polar orbit missions since 1969 have taken off from Vandenberg where rockets remain above the Pacific Ocean all the way to orbit.

SpaceX initially planned to launch SAOCOM 1B from Vandenberg, but sought permission to move the flight to Cape Canaveral to ease ground processing issues.

The company presumably won government approval for the move in part because of the dogleg maneuver, which minimizes overflight of populated areas, the rocket’s high altitude by the time it reaches populated areas farther downrange and because the Falcon 9 features an automated flight safety system. The AFTS is designed to quickly terminate a flight if an impending catastrophic problem is detected.

The 6,720-pound SAOCOM 1B requires a polar orbit to enable its cloud-penetrating radar to observe the entire planet as it rotates below. The spacecraft will work in concert with an identical L-band radar mapper launched in 2018 along with Italy’s COSMO-SkyMed X-band satellites.

Bound for a 360-mile-high orbit, the $600 million SOACOM system is designed to monitor soil moisture and a range of other factors affecting the agricultural sector, collecting high-resolution data around the clock regardless of cloud cover.

“One of the main targets of the SAOCOM satellites is to provide information for the agriculture sector,” Raúl Kulichevsky, executive and technical director of CONAE, Argentina’s space agency, told Spaceflight Now.

“One of the things we develop is soil moisture maps, not only of the surface, but taking advantage of the L-band capabilities we can measure the soil moisture 1 meter below the surface of the land. So this is very important information.”