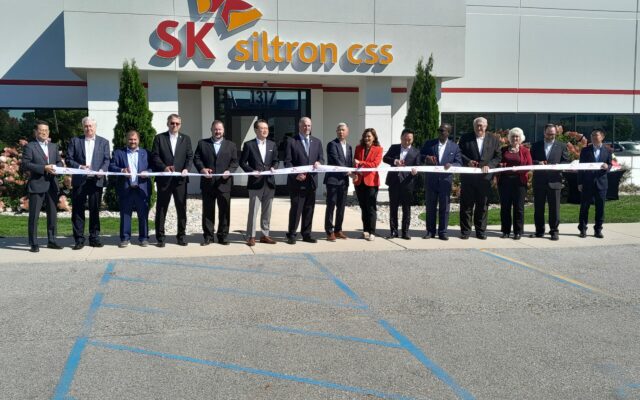 SK Siltron CSS, a subsidiary of South Korea-based SK Group, is an manufacturer of specialty wafers made of silicon carbide that can be used in electric vehicles to allow a more efficient transfer of electricity from the battery to the motor, increasing the driving range by 5 to 10 percent. The company has invested $300 million into the facility and will hire more than 150 people for high paying, high skilled jobs.

Governor Gretchen Whitmer was in attendance, saying SK Siltron’s commitment to Michigan will help bring the semiconductor supply chain home, cut down shortages and delays and create good-paying jobs for residents in the region. She says the company chose the region and Michigan over several other states, highlighting Michigan’s strong workforce and business frriendly environment.

Congressman Dan Kildee was also at the ceremony. He highlighted the recently passed CHIPS and Sciences Act, which brings critical semiconductor manufacturing back to Michigan, boost the domestic economy and strengthen America’s economic competitiveness. The new law, which was supported by Republicans and Democrats, includes dedicated funding to support the domestic production of chips and tax incentives to spur investment in building new semiconductor facilities in Michigan.
Kildee says the investment is ultimately about making a stronger economic future for the region and state.

For information about employment with the company, visit sksiltroncss.com/careers.