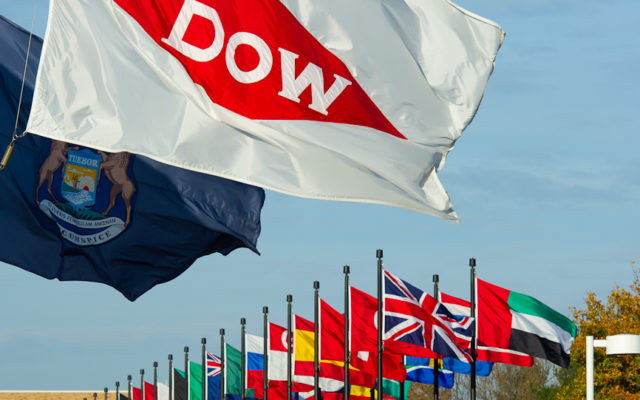 2020 marks the eighth year OUTstanding, a professional network for LGBT+ executives and their allies, has published these lists. A Dow leader has been recognized on one of these lists each year since 2014. The 2020 lists include the most we’ve ever had in a single year, with seven Dow leaders receiving the honor. Annual rankings are based on a review process of nominees selected among professionals actively contributing to an environment where employees feel safe, respected and valued both within and outside of the workplace.

“Role models inspire the next generation of leaders to live meaningful lives and lead by example with integrity, optimism, hope and determination,” said Karen S. Carter, chief inclusion officer and chief human resources officer, Dow. “I’m grateful and proud to have these seven leaders on Team Dow inspiring us all.”

In addition to this year’s honorees, after being named to the Top 100 LGBT+ Executives list for five consecutive years – including ranking #1 in 2018 – Jim Fitterling, Dow chairman and chief executive officer, will be elevated to the OUTstanding Hall of Fame, joining other long-standing champions for LGBT+ inclusion.

Javier has been a longtime advocate for Dow’s equity, inclusion and diversity initiatives, supporting the establishment of a more inclusive and diverse culture both at the company and within our communities. He serves as a member of Dow’s Presidents Inclusion Council, driving inclusion at the highest levels of seniority on a global scale and he has been directly involved in various Employee Resources Groups as a member, including GLAD, Dow’s LGBT+ and Ally ERG. While serving as commercial vice president in Europe, Middle East and Africa, Javier supported GLAD in increasing the company’s participation in Zurich Pride by a factor of ten. He continues to serve as a mentor to LGBT+ talent, guiding them through the specific challenges faced by LGBT+ people in a professional environment. Javier has participated for the last three years at the Young African Leadership Institute in Nairobi, Kenya, focusing on LGBT+ inclusion and more recently, he has spoken on panels for Out & Equal on the Latin American landscape for LGBT+ inclusion, and participated in ‘Fórum de Empresas e Direitos LGBT’, an organization in Brazil which gathers companies to take action on LGBT+ inclusion.

Louis is global advisor for GLAD, and executive sponsor for Dow’s Social Justice Council. He has worked with GLAD chapters globally to promote a more inclusive workplace for all employees, helping Dow achieve a perfect score on the Human Rights Campaign’s Corporate Equality Index for 15 consecutive years. With a focus on intersectional inclusion, Louis is helping to lead the implementation of Dow ACTs, the company’s strategic framework to address systemic racism and inequality. As vice president, Government Affairs & Advocacy for North America, Louis is engaged in conversations with elected officials and industry leaders on the importance of inclusive workplaces. He leverages these relationships in support of the bipartisan passage of the Equality Act in the U.S. House of Representatives. Using his vast international experience, Louis drives greater equality for LGBT+ people and all underrepresented communities globally through continued engagement with worldwide NGOs and partners.

As the executive sponsor for GLAD, Amy has helped propel Dow towards becoming the most innovative, customer-centric, inclusive and sustainable materials science company in the world. She has hosted numerous internal sessions and events that focus on various aspects of inclusion, such as racial injustice and LGBT+ inclusion. As part of Dow’s Leadership Education Series, Amy emphasized the importance of inclusion across all levels of business and used her extensive experience with Dow’s board of directors to inspire change. Additionally, Amy serves on the board of directors for the U. S. Chamber of Commerce and is a member of the Society for Corporate Governance. Amy’s wealth of legal knowledge makes her an ideal external spokesperson on matters of LGBT+ inclusion across global business.

As the first-ever employee experience champion at Dow and a 35-year employee, Terri is focused on improving the company’s culture for all, and the commitment to inclusion, including LGBT+ inclusion, is one facet of the cultural change. She is working on progressing Dow’s policies and practices, tools and resources, and overall work environment. While serving as the North America executive sponsor of GLAD, Terri has revamped the GLAD strategy, refocusing the organization creating more inclusive and equal workplaces and communities for LGBT+ employees through both internal and external activities. Terri is active in the Midland, Michigan community, serving as a member of the Midland Inclusion Council, a volunteer group addressing and assisting with inclusion and diversity opportunities and enhancements; vice chair of the board of trustees, Greater Midland Community Centers; and chairman of the board, The H Hotel Properties.

Jarrod was the first regional leader for GLAD in Asia Pacific (APAC), and is a member of GLAD’s global steering team. He worked to make Dow APAC more open and visibly inclusive for LGBT+ employees through education, training, sharing stories and highlighting LGBT+ talent. He helped grow the ERG in APAC from 35 registered participants to over 680. Jarrod has also been a keynote speaker at Dow’s first APAC Inclusion Conference and at Dow Inclusion Seminars across the region, discussing LGBT+ inclusion. He also serves as a panel member discussing LGBT+ inclusion, tolerance and human rights across Asia. He was previously a member of the Dow Thailand Inclusion Council, advising country leaderships in their efforts to make Dow’s Thailand sites and workplaces more inclusive. He was named one of Dow’s eleven Global Champions of Inclusion for 2020. Jarrod is also a founding member and executive committee member of Thailand’s first LGBT+ business network: [email protected] Thailand.

Jose Alberto is the global NGO Liaison for GLAD and is also on the ERG’s global steering team. He was an ambassador for Dow’s 2019 Global Pride Campaign and leads trainings on diversity and inclusion across Latin America. Jose Alberto is also a keen speaker on LGBT+ inclusion and has conducted a TED talk during Instituto Empresa: [email protected] event in Madrid. He is a regular panelist at events, having spoken at Out&Equal, REDI and UDEM, among many others. Jose Alberto advised on the creation of an LGBT+ ERG for Univar Latin America, one of Dow’s commercial partners in Latin America and around the world. He is also president of EXATEC Diversidad LGBT+, where he promotes the values of inclusion and economic empowerment for LGBT+ entrepreneurs. He also mentors students in Mexico’s leaders of the future program.

Alex is an operations leader at Dow’s Texas City plant and global leader for GLAD. He works to set the strategy for the network, aligning it to Dow’s ambition. Under his leadership, Dow received several recognitions, including the company’s 15th consecutive perfect score on the HRC corporate equality index, the 2020 Out & Equal Workplace Equality Award, and listing as a top employer for the LGBT+ community by Diversity Inc. Often seen as a panelist at events, Alex promotes numerous US state-based legislative initiatives to both support and oppose policies affecting the LGBT+ community and has been instrumental in supporting HRC’s Federal Equality Act legislation.

Leading the way on inclusion and equality

Dow also works to help shape public policy for fair and equal treatment of all LGBT+ citizens through state and federal advocacy efforts in the U.S. Dow has achieved unparalleled progress in LGBT+ equality in the workplace and beyond, gaining national recognition for its inclusive culture and standards. Beginning in 2005, Dow has received a 100% rating on the Human Rights Campaign’s Corporate Equality Index for 15 consecutive years – the first company in the chemical industry to receive this recognition.