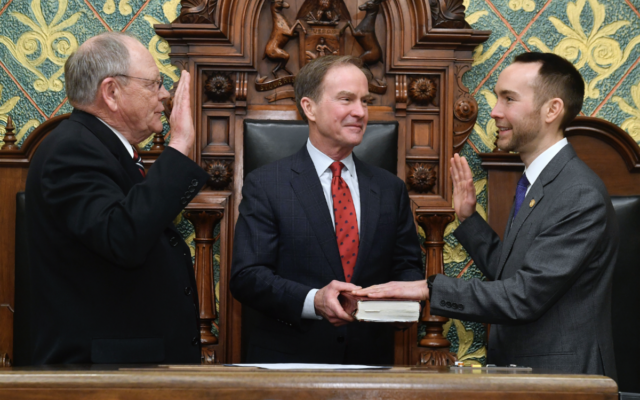 Thursday, Midland native, Bill G. Schuette took the oath of office for Representative in the State Legislature for the term beginning January 1, 2023.

Schuette was sworn in the on the floor of the Michigan State House, by the Clerk of the House Gary Randall, while Schuette’s father, former Attorney General Bill Schuette held the family bible. The new representative of Michigan’s 95th State House district acknowledged the significance of the responsibility and the occasion, saying it was an honor to be sworn in on the House floor by by a legend of the institution, Clerk Gary Randall, and to have his father there. Schuette also announced the hiring of his office staff. Luke Derheim, formerly Campaign Manager for John Moolenaar’s Congressional Campaign, will serve as his Legislative Aide for Policy Services. Bill Azelton will be the Legislative Aide for Constituent Services.

Opening day for the 102nd State Legislature is Wednesday, January 11, 2023.  Following the event, Schuette will welcome family, friends and supporters to an open house in his new office – Room N1199 in the Anderson House Office Building in Lansing.