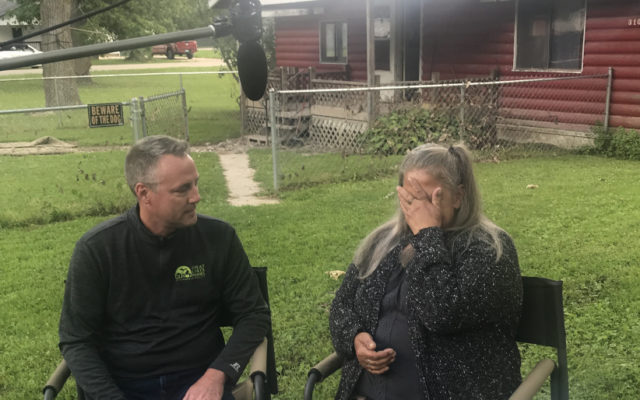 Penny Tyler, 57, says water in her Sanford home had nearly been touching the ceiling after last month’s failures of the Edenville and Sanford dams resulted in record flood levels.

Inspectors say her house needed to be condemned and torn down after it was taken off its foundation and water damage had threatened its structural integrity.

She said her insurance claims have all been denied and she lives on social security due to a severe car accident several years ago.

After the water went down, she and her Jack Russel Terrier (Bugsy) had nowhere else to go, so she moved into a camper several yards away from the condemned home …but was beginning to worry about how things would fare in colder weather.

Her story had been passed on to Dave Dennis from Great Lakes Homes in Freeland.

During a surprise reveal, Dennis shared he will be funding the demolition and rebuilding of her home from the ground up- free of charge.

Word of Penny’s situation also made its way to the Islamic Center of Midland and Midland Interfaith Friends, who will be furnishing the home after damage destroyed everything of hers inside except an airtight tub full of family pictures.

The flooded home had been in her family since she was 3 years old, where she made memories with her parents, siblings, and her own children.