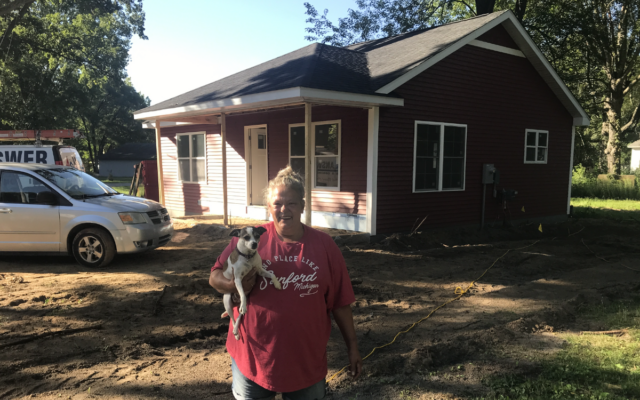 Penny Tyler lost her house to the May flooding in Sanford, but since then, work on a new home has nearly finished.

She says contractors have been working day-in and day-out to finish before the weather starts to get cold.

Inspectors had deemed her flood-damaged home a total loss after it had shifted off its foundation and filled with water within a foot of the ceiling.

The flooded home had been in her family since she was 3 years old, where she made memories with her parents, siblings, and her own children.

Work on the home had begun mid-June after her story had been heard by Dave Dennis, Owner of Great Lakes Homes in Freeland, who promised to completely cover the costs of demolition and reconstruction.

Word of the situation made its way to the Islamic Center of Midland and Midland Interfaith Friends around that time as well, and they had offered to furnish the home after damages destroyed everything inside except an airtight tub full of Penny’s family pictures.

Her new house will be essentially the size of what she had before the flood, just the necessities with a few modern updates.

Finishing touches have been applied to the drywall and flooring, meaning Penny and her Jack Russel Terrier, Bugsy, could be moving out of their camper in the yard and into the new home as soon as the end of august or mid September.

According to her- it’s not too big, too small, or too flashy; and that’s just perfect.