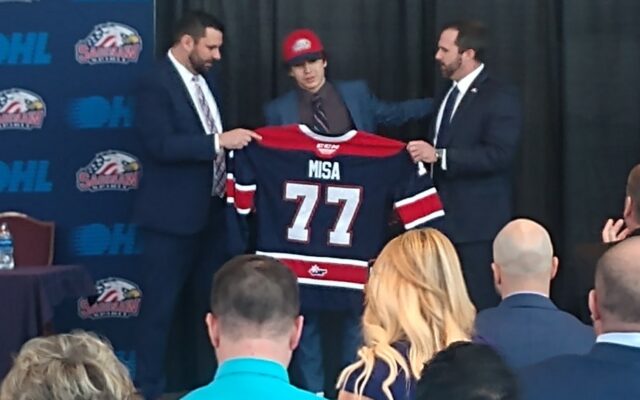 The Saginaw Spirit received the first pick in the 2022 OHL Draft, and they believe their new player is something really special.
15-year-old Michael Misa of Oakville, Ontario, is only the sixth player in OHL history to be granted “exceptional status,” meaning his level of play and maturity qualifies him to join the OHL a year early. Other players in that category include Sean Day, Connor McDavid, Shane Wright, Aaron Ekblad and John Tavares.

Misa, playing for the Mississauga Senators in the Greater Toronto Hockey League, scored 20 points in seven games during this year’s OHL Cup, setting a new record.

Misa says he’s excited and honored to be with the Saginaw franchise.

“It’s so exciting, you know, just the whole atmosphere of Saginaw, it’s such a great team, the fans… everything about it. It’s somewhere I want to be.”

The Spirit ended their 2021-2022 season on April 16 with a 24-43-1 win-loss record. Spirit General Manager Dave Drinkill says Misa’s skill on the ice, his level of maturity and his passion for the game will help make the Spirit a winning team, though Head Coach Chris Lazary says Misa still has a lot of development ahead of him.

“He’s competitive, very smart… Like, he’s exceptional, there a lot that comes along with it. But to me, we gotta start on making him a better human and player and pushing the boundaries.”