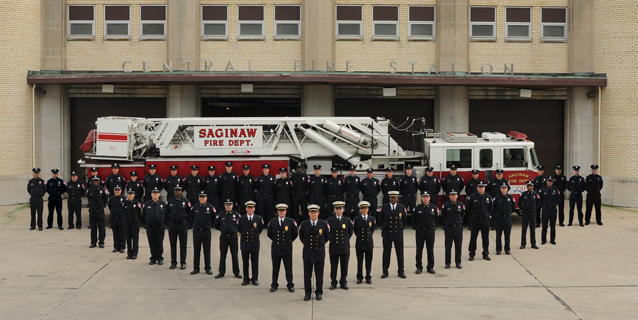 Public servants and community leaders gathered at the Saginaw Central Fire Station Tuesday morning for the fire department’s annual awards ceremony. The event is held every year during Fire Prevention Week to recognize firefighters and community members who go above and beyond to prevent loss of life or property.

During the awards ceremony, Engineer Shaun Girard was named the 2022 Firefighter of the Year.

Fire Chief Thomas Raines praised Girard’s hard work, stating, “Shaun has stood out this year for his willingness to jump in and help us wherever he could. He’s got a unique set of skills when it comes to mechanical skills, and he’s used those skills to benefit the Saginaw Fire Department and the City of Saginaw.” Before joining the Saginaw Fire Department, Girard was a firefighter in the Air Force, and served 8 years on active duty.

Battalion Chiefs James Champney and Scott Yaw were also awarded for their 25 years of service to the department, and Training/Safety Officer Brandon Hausbeck and Captain William McCarthy were given the Chief’s Special Recognition Award. Additionally, the inaugural class of the High School Fire Academy was recognized for earning their State Firefighter Certifications.