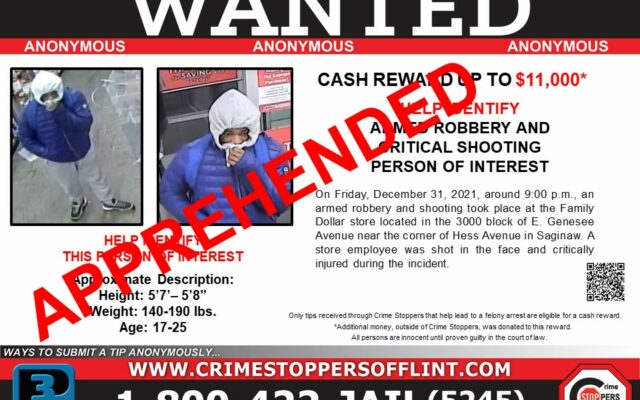 A man wanted in connection with a new year’s eve shooting at a Saginaw Family Dollar has been arrested.

According to Crime Stoppers of Flint & Genesee county, the man shot a teenage employee, 18 year old Ariana Flynn, in the face while robbing the family dollar around 9pm December 31st near East Genesee and Hess avenues.

The suspect, arrested Monday, fled the scene prior to police arrival with an unknown amount of money. The victim was transported to a local hospital, then transferred to another hospital for treatment of serious injuries and is now recovering at home.

An $11,000 reward was put forward by Crime Stoppers to help find the suspect, and a number of crowd sourcing fundraisers were established to help support Flynn’s physical and emotional recovery.

Milano’s Pizza in Saginaw township will also be hosting a fundraiser on January 17th for Flynn, from 4 to 9pm.

The incident remains under investigation. Saginaw Major Crime Unit detectives are asking that with information about this incident call State Police Trooper David Murchie at 989-385-6844.