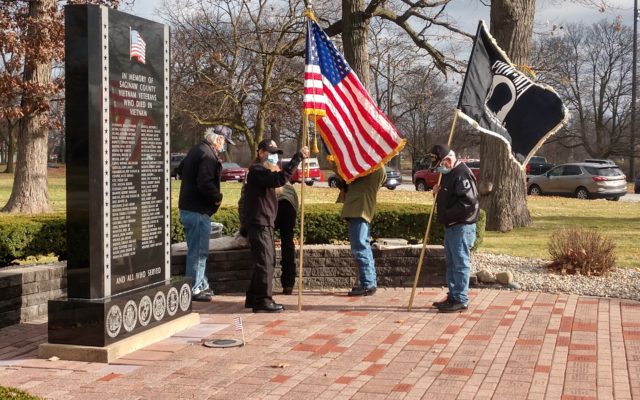 Veterans from all branches of the military gathered in Saginaw’s Hoyt Park Veterans Memorial Plaza Wednesday to honor those who have served. Wind and cold weather did not deter veterans and their families from participating in the event. Originally called Armistice Day to commemorate the end of World War One, the holiday was changed to Veteran’s Day in the U.S. in 1954 to honor those who served in all conflicts, including World War II and the Korean War.

Keynote speaker Ryan Hageness, a federal police detective for the Department of Veterans Affairs and a Marine Corps veteran, said there is a brother and sisterhood among veterans, regardless of what branch they served. He said America could learn a lot from that lesson.

“In the veteran community you’ve got people from all walks of life, but you all come together for that one common mission, that common purpose. I feel like if we as a veteran community can impart that on the rest of the country, I think we’ll be so much better off,” said Hageness.

Hageness said in our polarized political climate, it’s hard to see family members and neighbors who won’t speak with one other because they don’t share political beliefs.