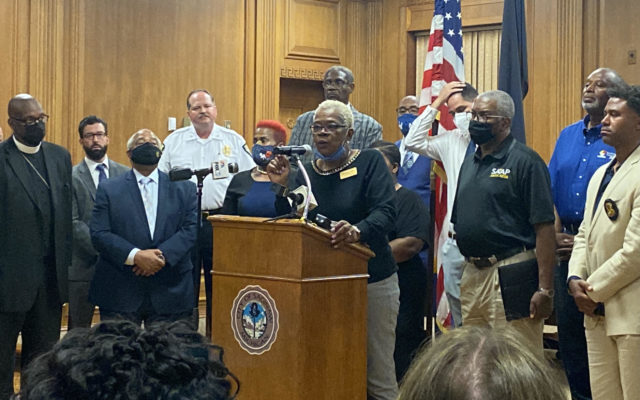 Mayor Brenda Moore opened the conference begging residents of all ages to put the guns down and solve their issues with love.

Many others, including members of the local NAACP branch and family members of gun violence victims, called for cooperation with police and increases in neighborhood watch and outlet programs.

Saginaw Police Chief Bob Ruth says many officers are working an increased number of overtime hours to help bring peace to the city, and residents providing information on incidents when they can helps immensely.

However, not even Saginaw City Council members are immune to the rise in gun violence in the city this summer.

Councilwoman Monique Lamar-Silvia shared that an ongoing investigation is looking at a situation where her daughter was robbed with a gun put to her head in their own home.

Despite the increased number of shootings,  Ruth says combined efforts of police in the city have taken a lot of guns off the street in recent weeks.

Tamara Tucker, a mother who lost her daughter to gun violence in 2019, was also able to speak at the conference.

Holding onto a bullet fired at her daughter, She shared her daughter’s story in a call to end the violence and promote a peace demonstration meant to help unite community support efforts.

Put on by the Parents of Murdered Children group from 5pm to 8pm at Saginaw’s Borchard park (100 N Michigan Ave) this Saturday, time and attention at the No More Silence, Stop Gun Violence rally will be focused on finding a solution to end violent crime in the city and gathering supporters for community efforts.