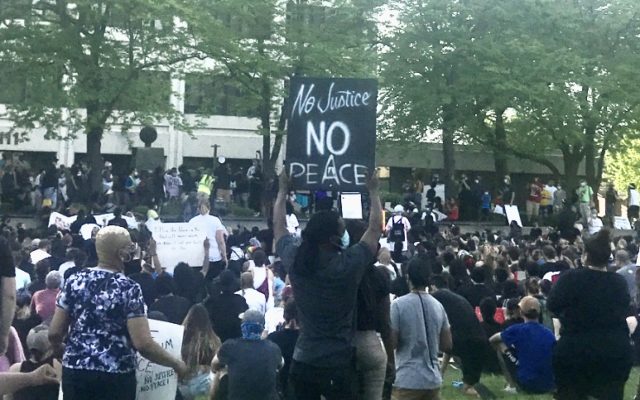 Photo of an earlier protest (6/2/2020) at the Saginaw County courthouse, with Protesters seeking justice shortly after the death of George Floyd (Photo- Ric Antonio; WSGW)

Hundreds  of people gathered at the Saginaw county courthouse to protest racial injustice, police brutality, and the death of Minnesota’s George Floyd.

Many were dressed in clothes or had signs in support of Black Lives Matter, and spoke about their own personal experiences with police.

The group marched from their starting point at Hoyt park to the front lawn of the Saginaw County courthouse from 6 to 8 pm, and police say no violence or obstructions were reported.

Pastor Elvin Owens of From the Heart Ministries in Bridgeport said he saw people of all ethnicities attending the event, and that when a community can be as unified as Saginaw is anything can be done.

County Sheriff William Federspiel, the Saginaw county mounted patrol, Michigan State police, and Saginaw police were waiting nearby after reports of a possible traveling group trying to stir up any commotion, but gladly did not have to intervene.

Many at the event were practicing safe social distancing and wore face coverings to help prevent spread of COVID-19 among the large numbers in attendance.