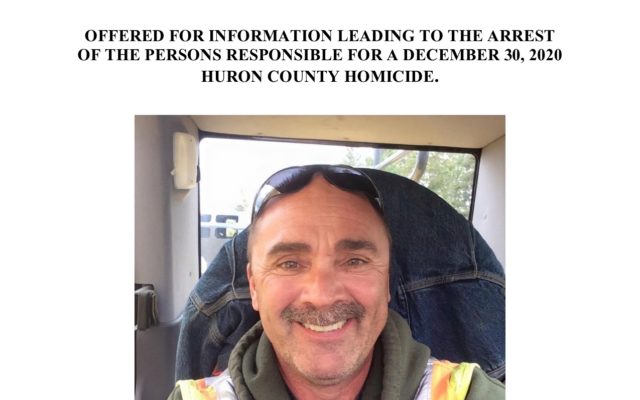 A reward for information leading to the suspects in the December 30th murder of Ricky Bailey in Huron County’s Verona Township is now up to $4,000. The Huron County Sheriff’s Office initially announced a $2,500 reward last week.

The 59-year-old Bailey was shot twice in his home with his two sons also in the house during the attack. They told investigators two armed men came into the home dressed in all black with ski masks over their faces. They said the suspects forced Bailey to the floor and were yelling at him about wanting “the money.” Huron County Sheriff Kelly Hanson said Bailey was then further physically assaulted by one of the assailants while the youngest son attempted to lock himself in a bathroom. Hanson said one of the assailants kicked in the bathroom door and escorted the boy to another room, telling him to lay on the floor. During this time, Hanson said the 20-year-old had taken cover in another room. He said the assailants then left,  which enabled the two sons to call for help. Hanson said the incident took place over a matter of minutes.

Anyone with information about this case may contact The Huron County Sheriff’s office during regular business hours at 989-269-6500, or Huron Central Dispatch anytime at 989-269-6421. Confidential callers can call the county’s TIPS Line at 989-269-2861 and leave a message.