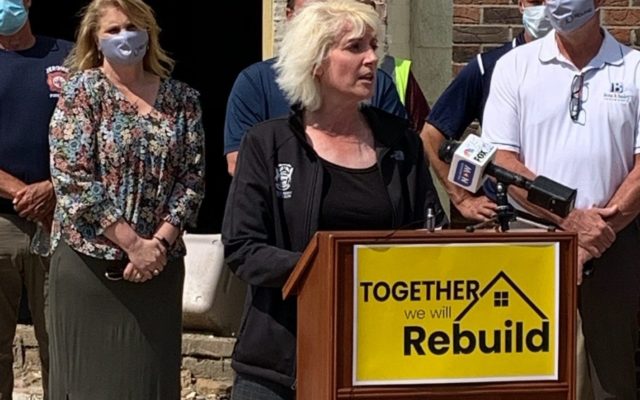 Rep. Annette Glenn, R-Midland, speaks before a large crowd in Sanford Thursday on her legislation appropriating $6 million to Midland County and the city of Midland to deal with devastating flood damage. (source: MI House Republicans)

Rep. Annette Glenn, R-Midland, chair of the House Appropriations Subcommittee on Military & Veterans Affairs and State Police, announced during a news conference in Sanford Thursday that she has introduced House Bill 5843, legislation to allocate $6 million to Midland County and the city of Midland to deal with the devastating flood damage.

“In the days and weeks following the flooding, I’ve been working in Sanford and Midland, cleaning out houses, tearing out drywall, insulation and carpet,” Glenn said. “I’ve talked with hundreds of flood victims and heard their stories. My heart goes out to the thousands of families affected by these unimaginably devastating challenges.”

Glenn said after the flood and talking to many residents, it was clear the community would need financial help moving forward. She said she “immediately began looking for ways to make that happen and brainstorming ways the state could step up.”

“As this measure makes its way through the legislative process, I look forward to working with Rep. Roger Hauck and Sen. Jim Stamas, chairman of the Senate Appropriations Committee,” Glenn said. “We’ve already had colleagues on both sides of the aisle in Lansing ask us how they can help, and I’m so proud to represent the people of this community and to witness the ways they’ve stepped up to help each other.”

“I want to compliment Rep. Glenn on her work as state representative,” Moolenaar said. “She’s been on the ground helping in so many ways – volunteering, helping pick up debris, all sorts of things. This is just one more example of the way she has stepped up to help in our community.”

While $6 million won’t be enough to resolve the problem completely, Moolenaar and Glenn agreed that it’s a great place to start.

“Every one of these people deserves an individual ‘thank you’ for the things they’ve done to help during this crisis,” Glenn said of community leaders attending the news conference. “We are Midland strong, we are Sanford strong, and together we will rebuild our community.”