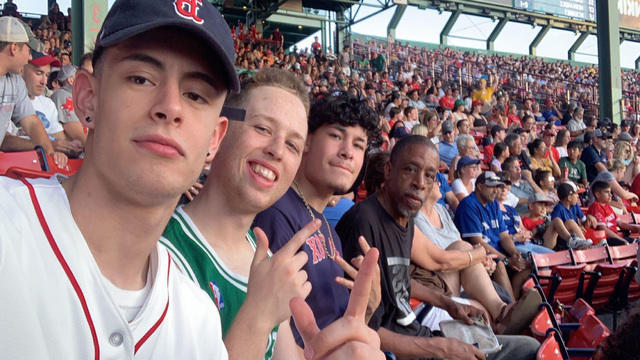 A group of friends from Malden, Massachusetts, had a blast at a Boston Red Sox game this week, all because they made an unlikely friend: a homeless man they met outside of Fenway Park.

Pedro Lugo, Sean Wetzonis and Francisco Rios had four tickets to see the Red Sox play the Toronto Blue Jays on Wednesday because one of their friends couldn’t make it. When they arrived at the stadium, they saw an older man outside asking for water, but they decided to give him much more: the extra ticket.

“My intention was to give it to someone who would have fun,” Lugo told CBS News. “My friend and parents suggested giving it to a girl or sell it. But I wanted to give it to him.”

They brought John, a Red Sox fan, into the game with them. “He was very excited to come and join us,” Lugo said. The group took photos and videos during the game, and they captured one of their favorite moments: singing “Sweet Caroline” with John and the rest of the crowd.

The Red Sox defeated the Blue Jays 5-4 and the young men won over people’s hearts. Ever since their videos and photos went viral, they’ve gotten several media requests to talk about their new friend.

They not only gave John a ticket to the game, they gave him a new friendship, too.