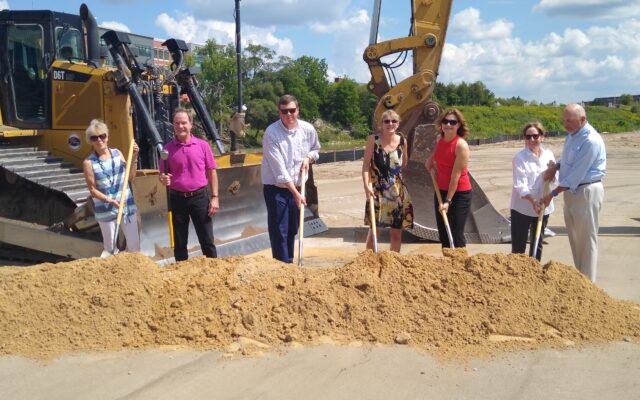 A vacant industrial lot in Midland is receiving renovations as part of a new wetland park project.

The South Riverfront Restoration Project brings together the City of Midland and the Michigan Baseball Foundation to establish a new public park on a vacant industrial property that was formerly the site of a concrete block manufacturer less than half a mile downriver from the Tridge. The new park will feature a parking area, two fishing piers, as well as a pavilion named in dedication to the late philanthropist Alan Ott, which will connect to a pedestrian walkway that spans the Tittabawassee river.

At a ceremonial groundbreaking Monday afternoon, President of the Michigan Baseball Foundation David Ramaker expressed his support for the project, stating, “This is truly a reclamation project of creating a wetland park out of an industrial blight. This changes the footprint for everybody coming into the city from Poseyville.”

The first phase of the project will remove tons of asphalt and industrial rubble from the site followed by the construction of a man-made mound of earth as a foundation for the park. Project leaders expect the park to be completed in 2 1/2 years.