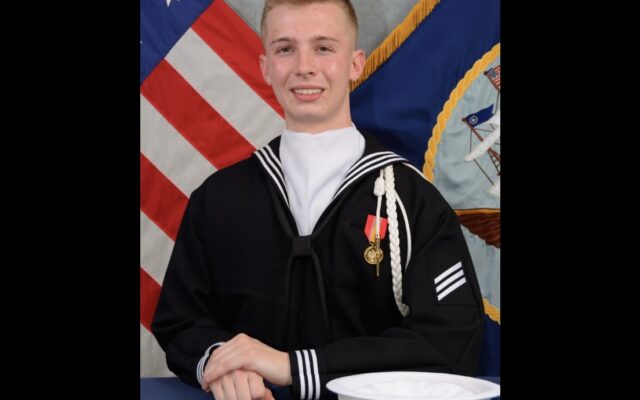 “I joined to do something outside of my small town and explore the world with a higher purpose,” said Rosekrans.

Rosekrans is a 2021 Pinconning High School graduate who joined the Navy four months ago. The U.S. Navy Ceremonial Guard’s primary mission is to represent the service in Presidential, Joint Armed Forces, Navy, and public ceremonies in and around the nation’s capital. Members participate in some of our nation’s most prestigious ceremonies, including Presidential inaugurations and arrival ceremonies for foreign officials.

“I like being able to perform ceremonies out in Washington,” said Rosekrans. “I got to do a ceremony at the White House, a place I never would have gone otherwise, if it weren’t for the Navy Ceremonial Guard.”

Sailors of the Ceremonial Guard are hand selected while they are attending boot camp at Recruit Training Command in Great Lakes, Illinois. The Ceremonial Guard is comprised of the drill team, color guard, casket bearers and firing party. They are experts in the art of close order drill, coordination and timing.

“I graduated from training in under ten weeks, which is faster than the typical time to graduate,” said Rosekrans.

Established in 1931, the U.S. Navy Ceremonial Guard is the official honor guard of the U.S. Navy and is based at Naval District Washington Anacostia Annex in Washington, D.C.

“It gives me a sense of duty and purpose,” added Rosekrans. “Being able to represent my hometown and family in the capitol is something that pushes me to work harder every day.”