Obama's high school basketball jersey is up for auction 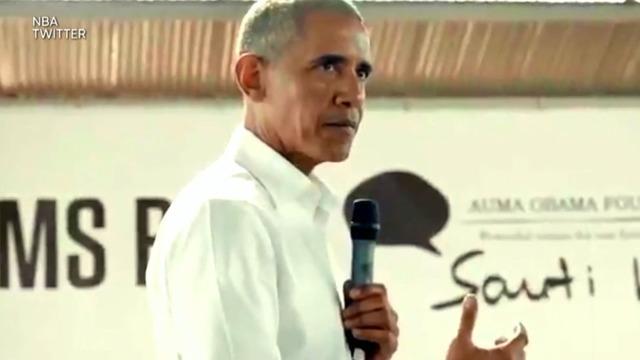 Noted basketball enthusiast and former president Barack Obama’s high school hoops jersey is up for auction. But if you want to own a relic from the 44th president’s glory days, it’ll cost you — bidding starts at $25,000.

Obama’s 1978-79 Punahou High School basketball jersey is on sale until mid-August through Heritage Auctions. You can find a replica of the jersey on Amazon, but this one was worn by Obama himself, when he was a senior in Honolulu playing for Punahou’s 1979 state champion varsity team.

The white jersey says “Punahou” and “23” on the front in blue lettering, and has faded over the years. Heritage Auctions expects it to sell for at least $100,000.

“A strong argument could be made that this auction lot represents the most important basketball jersey that exists,” Heritage Auctions’ listing reads.

The jersey belongs to Peter Noble, who is three years younger than Obama and wore the 23 jersey while playing for the junior varsity team at Punahou. Noble’s yearbook from Obama’s senior year is included in the auction as well.

Obama has remained involved in the basketball community throughout his life. He had a basketball court installed on the White House grounds during his time in office and was regularly seen playing pickup games with members of his Cabinet.

Every year, Obama releases his March Madness bracket for the men’s and women’s tournaments, and regularly attends their games.

In February, he announced his involvement in launching a new league in Africa to grow the game across the continent.

“I’ve always loved basketball because it’s about building a team that’s equal to more than the sum of its parts,” Obama tweeted following the announcement. “Glad to see this expansion into Africa because for a rising continent, this can be about a lot more than what happens on the court.”