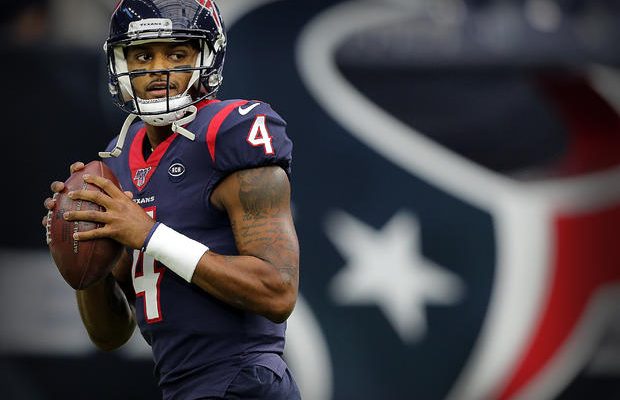 Houston Texans quarterback Deshaun Watson has been accused of civil or sexual assault by seven women, according to lawsuits filed this week in Harris County, Texas. The NFL is investigating the allegations, which Watson denies.

Attorney Tony Buzzbee, who is representing the women, held a news conference Friday and said he’s representing a total of 12 women who made similar allegations against Watson. Only seven lawsuits have been filed so far.

The seven women, who are all service workers in the health and wellness industry, say they were assaulted by Watson after he contacted them for a massage during separate incidents in 2020.

The most serious allegation claims that Watson, 25, forced a woman to perform oral sex on him during a massage therapy session in December of that year. That woman, identified only as “Jane Doe,” claimed that soon after she started massaging Watson, he “aggressively started dictating the massage and where he wanted Plaintiff to touch him on his body,” allegedly directing her to focus on his glutes, his “inner thighs” and his “inner glutes.”

“Watson made clear, repeatedly, that he was a professional football player, who could help, or hurt, her career,” the suit alleges.

At one point, the lawsuit states, Watson “got more aggressive, forcefully telling her to move her hand down to his pubic area,” and “instructed her to slide her hand across his genitals” before forcing her to perform oral sex on him.

The lawsuit says the victim “blacked out” for a few minutes out of fear during the encounter, and was “confused” and “terrified.”

The other six lawsuits accuse Watson of a similar series of actions: aggressively directing the alleged victims to focus on inappropriate areas of his body, exposing himself, and in some cases, touching the victims with his genitals.

One lawsuit accuses Watson of telling an esthetician that she was wearing too many clothes and attempting to kiss her on the mouth after she allegedly refused his request to touch his genitals.

Another suit claimed he directed a massage therapist to focus on his groin area in a way that made her “extremely uncomfortable.” Watson then allegedly exposed himself and touched the plaintiff’s hand with the tip of his penis.

When the plaintiff started crying and asked him to leave, Watson allegedly responded, “I know you have a career and a reputation, and I know you would hate for someone to mess with yours, just like I don’t want anyone messing with mine.” He then left without incident, the lawsuit states.

After Buzbee announced he had filed the first of the lawsuits earlier this week, Watson tweeted a statement denying any illegal conduct.

“As a result of a social media post by a publicity-seeking plaintiff’s lawyer, I recently became aware of a lawsuit that has apparently been filed against me,” Watson said Tuesday. “I have not yet seen the complaint, but I know this: I have never treated any woman with anything other than the utmost respect.”

Watson has not spoken publicly since his original statement. His attorney released a statement Friday calling the claims “meritless allegations,” but said “we will wait to comment in detail until we’ve completed our review of the numerous, evolving allegations from Mr. Buzbee.”

Many of the plaintiffs said they’ve suffered panic attacks and “mental anguish” in the aftermath of the alleged incidents. The plaintiff accusing Watson of sexual assault cannot mention Watson’s name without “sobbing and hyperventilating,” her lawsuit said. Buzbee said Friday that three of his clients are undergoing “intensive therapy” as a result of the alleged incidents.

NFL spokesperson Brian McCarthy on Thursday confirmed that the league is investigating the allegations. “The matter is being reviewed under the NFL’s personal conduct policy,” McCarthy said in an email.

Buzbee said Friday that the Houston Police Department has contacted him about the allegations. But the department tweeted later Friday it is “unaware of any contact between HPD and Houston attorney Tony Buzbee” regarding the allegations.

The Texans said Thursday the team plans to stay in “close contact” with the league throughout the investigation. The team said it will “continue to take this and all matters involving anyone within the Houston Texans organization seriously,” but said it does not anticipate commenting again before the NFL’s investigation is complete.  When asked Friday about the new allegations, a spokesperson for the team referred CBS News to the Thursday statement.

Watson is one of the best quarterbacks in the NFL, and made headlines when he demanded a trade earlier this year. He led the league in passing yards in 2020, but grew unhappy after the team went 4-12 for the year. Still, the team’s top executives said at the time that they had no plans to trade him.

“This case is about women… brave women who are willing to step forward knowing they will be criticized and ostracized and we should get behind them, applaud them for their bravery and support them,” he added.