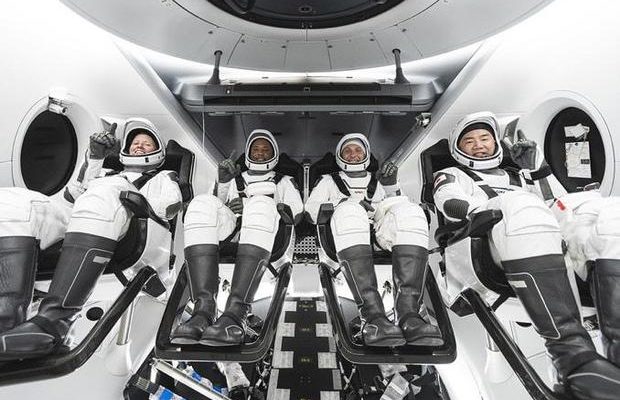 NASA now plans to launch four astronauts to the International Space Station aboard a SpaceX Crew Dragon spacecraft on October 31, a Halloween flight that will mark the first operational use of the capsule following a successful piloted test flight earlier this summer.

The space agency initially targeted October 23 for the “Crew 1” mission, just nine days after the October 14 launch of two cosmonauts and NASA astronaut Kate Rubins aboard a Russian Soyuz spacecraft and two days after NASA flier Chris Cassidy and two cosmonaut crewmates return to Earth on October 21 aboard another Soyuz.

By delaying the Crew Dragon flight to October 31, the station crew and flight controllers in the U.S., Russia, Europe, Canada and Japan will get a chance to catch their collective breath while allowing additional time to resolve any open issues.

“The new target date will deconflict the Crew-1 launch and arrival from upcoming Soyuz launch and landing operations,” NASA said in a blog post. “This additional time is needed to ensure closure of all open work, both on the ground and aboard the station, ahead of the Crew-1 arrival.”

Docking at the space station is expected around 5 a.m. on November 1. They will be welcomed aboard by Rubins and her two crewmates, Sergey Ryzhikov and Sergey Kud-Sverchkov. Whether they might welcome their new crewmates aboard with any Halloween treats is not yet known.

NASA helped fund development of SpaceX’s Crew Dragon and Boeing’s CST-100 Starliner capsule to end the agency’s sole reliance on Russian Soyuz spacecraft for ferry flights to and from the space station.

Since 2006, NASA has spent some $4 billion buying Soyuz seats for station-bound NASA astronauts. With Rubins taking NASA’s last currently contracted seat, the agency is counting on SpaceX and Boeing to keep the station fully staffed for the remainder of its operational life.

SpaceX, under an initial $2.6 billion contract, designed a crewed version of its Dragon cargo ship that would ride into orbit atop the company’s Falcon 9 rocket. Boeing designed its own capsule under a $4.2 billion contract, relying on United Launch Alliance Atlas 5 rockets for the trip to orbit.

SpaceX successfully carried out two required test flights of the Crew Dragon spacecraft, an unpiloted voyage to the station in March 2019 and a piloted flight with NASA astronauts Douglas Hurley and Robert Behnken on board. They took off May 30 and safely returned to Earth on August 2.

In the meantime, NASA is counting on SpaceX and its Crew Dragon to send four astronauts at a time to the space station. Shane Kimbrough, Megan McArthur, Japanese astronaut Akihiko Hoshide and European Space Agency astronaut Thomas Pesquet plan to blast off on the Crew 2 mission in late April, replacing their Crew 1 colleagues.