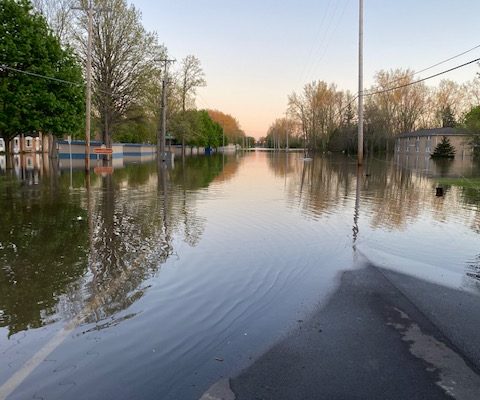 Saginaw Township Police and Fire units were sent to rescue a motorist who was swept away in high water after getting out of his disabled pickup truck around 6:00 this morning. His truck stalled when he attempted to drive through the flood waters at South Center and
W.Michigan.

Upon arrival, responders learned that the 19 year old man had left his vehicle and attempted to walk to the vacant store on the southwest corner. A witness observed the swift current sweep the young man under the flood waters. Fire department personnel quickly launched their inflatable boat and were able to find the young man clinging to a tree.

He was rescued by fire personnel and treated by MMR paramedics for numerous small cuts and scratches from being dragged through the water and striking debris. He did not require medical treatment at a hospital.

Fire Chief Peterson and Police Chief Pussehl warn motorists not to attempt to drive through standing water on closed roadways. Vehicles can easily become disabled because the river currents are extremely swift and dangerous as indicated by this incident.