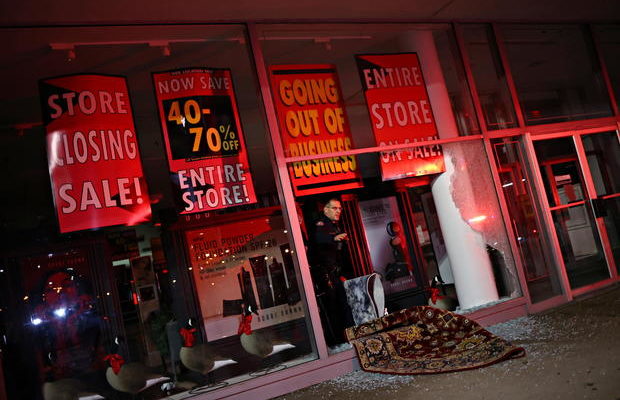 More looting was reported across Philadelphia late Wednesday and early Thursday despite a citywide curfew in the wake of the deadly police shooting of Walter Wallace Jr., CBS Philly reports. More than half the stores in a northeast Philadelphia strip mall were vandalized overnight.

One of the stores’ managers told the station a group of about 12 to 15 people drove up to the shopping center at about midnight and went business by business, smashing doors and windows.

“We were inside, and we were doing a couple of cleaning jobs and everything, trying to spruce the place up at the time and we saw a bunch of cars pull up so we hit the lights,” Redz Bar and Grill manager Kevin Donahue said. ” … They came up with bats and just start smashing windows.

“We heard them smashing windows down the road … (at the) liquor store, cleaners, but luckily they just smashed our windows and hightailed it out.”

Some owners said nothing was taken but they now have to clean up broken glass and board up and replace windows.

“It’s a new day but it’s also yesterday so I don’t know what to call it, but it’s clean up day, that’s for sure,” Donahue said.

No one was injured and no arrests were reported.

Vandals also struck along the city’s Main Line. A Lord & Taylor was one of several businesses badly damaged. A nearby gas station was also damaged. Looters also struck a Target store.

On Wednesday, Philadelphia officials said 81 people were arrested during the widespread unrest on Tuesday night sparked by the Wallace shooting on Monday.

Wallace, a 27-year-old Black man, was killed after, authorities said, he ignored orders to drop a knife.

The incident was caught on video, which police vowed to release soon.

Wallace’s family pleaded for calm and said he had a history of mental health issues and disputed that there was a need to shoot him.

Police told the station they found propane tanks and torches. No one was at that van at the time and no arrests have been made.