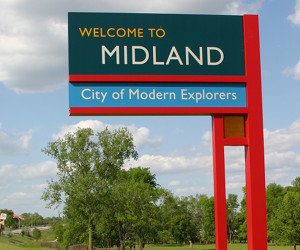 The city of Midland has recognized its Police Officers and Firefighter of the Year.

Two officers were named the as the 2021 Carl and Esther Gerstacker Police Officers of the Year. Tyler Hollingsworth, a second-time Officer of the Year winner, served as a field training officer and member of the Midland County Dive Team and the MPD Technology Committee. He’s been with the department since 2015. Chuck Brown is currently a field training officer with the Midland Police Department. He began there in 2014 after serving the Saginaw Chippewa Tribal Police for 15 years.

Hollingsworth and Brown were nominated for their professional and heroic actions while responding to a domestic call on December 24, 2020. During the incident, an explosion occurred that caused a large fire and fatal injuries to the suspect. Both officers were also injured in the incident while trying to secure the scene and provide care to the suspect.

Justin Fox, presented with the 2021 Carl and Esther Gerstacker Firefighter of the Year, is an acting fire truck operator, acting lieutenant, hazardous materials (HAZMAT) technician, and emergency medical technician. He also one of the department’s live fire training instructors. He’s held leadership roles in the Midland Professional Firefighters Local 1315 and is currently the Northern Trustee for the Michigan Professional Firefighters Union.

Recently, Fox attended training to become a peer support person for firefighters experiencing behavioral and-or mental health issues, giving him tools and resources to help firefighters in distress get treatment options they need. He’s been with the Midland Fire Department since 2008.