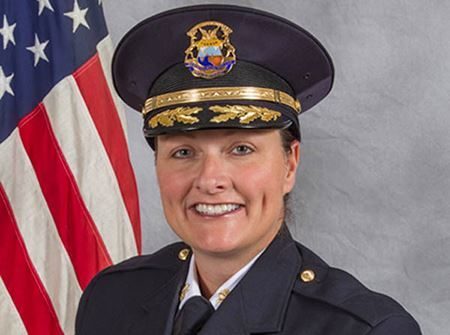 Ford has been in law enforcement for 22 years and has experience in areas including community policing, emergency response and command staff leadership. Most recently, she served as interim police chief and deputy police chief for the city of Flat Rock. Michigan and previously held roles as a lieutenant with the Huron Clinton Metroparks Police Department and as a sergeant and patrol officer with the Northfield Township Police Department.

Ford holds a bachelor’s degree in public safety administration and a master’s degree in public administration, both from Eastern Michigan University. She is also a graduate of the EMU School of Staff and Command and serves on its Police Staff and Comman Executie Panel. She is an Assessor for the Michigan law Enforcement Accreditation Commission and is a member of the Michigan Association of Chiefs of Police and its Training and Education Committee.

“Chief Ford is a highly respected professional in Michigan’s law enforcement community and brings with her extensive experience in all facets of community safety and security,” said Midland City Manager Brad Kaye. “We are excited to welcome her to Midland and look forward to her leadership in both the community and the Midland Police Department.”