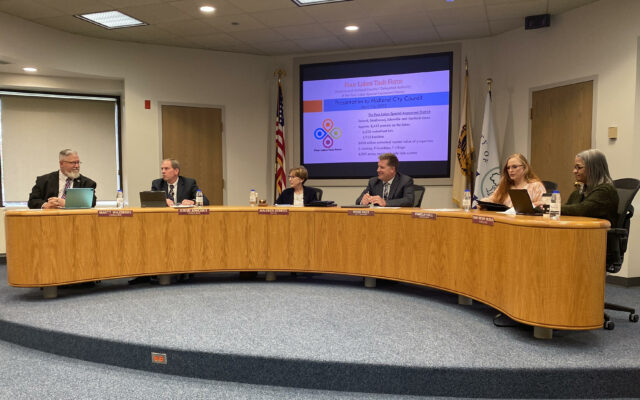 Midland City Council heard from officials with the Four-lakes Task Force and the Midland Advisory Comittee on Infractructure on dam restoration progress and flood preparedness.

Taskforce Vice President Dave Rothman and Principle Engineer Ron Hansen shared that with construction permits for two Dams already submitted to the state and the other two expected within the next 6 months; a timeline for all four being rebuilt has Sanford standing again in 2025, Edenville in 2026, and both Secord and Smallwood up by the end of 2024.

According to Rothman, the new dams will focus on river pass-though rather than potential energy production or lake levels.

The new constructions will be built to not only survive theoretical 5,000-year (edenville & Sanford) or 10,000-thousand year (Secord & Smallwood) floods- but manage them and allow for better emergency procedure.

In terms of Flood preparedness, Tony Stamas with the Midland Business alliance says since flooding of any scale is no anomaly to the area, the infrastructure committee has partnered with the U.S. Army Corp of Engineers to work on studies on how best to mitigate those issues.

One suggested idea included expanding wetland environments, like the Shiawassee Nature preserve downstream, that have proven to suck up floodwaters.

In terms of cost related to dam repairs- Hansen says the task force has secured all but $60 million dollars through grants and private donations from businesses like Dow.

That $60 Million is expected to be gathered from a multi-year special assessment tax zone made up of the residential areas around the affected lakefronts.