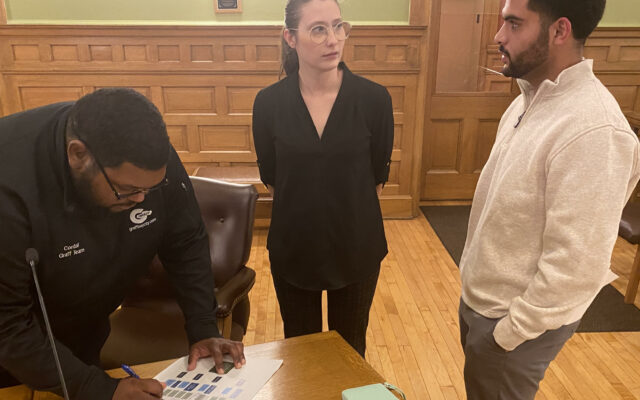 Third time’s the charm- Bay City has its third 3rd Ward commissioner in a little under a year and a half.

25-year-old Trey Pinkstock is the freshest name to fill the role.

Graduating from ‘ Ohio State University with a Marketing-Communications background; Pinkstock says he has both a feel for bigger cities and smaller communities, and is hoping to take what he knows into the role and mix it with resident input.

He and his Fiancé moved to the area about a year and a half ago from the Akron-Canton area, joining a role with the Bay City chamber of commerce.

While the official swearing-in for the new 3rd ward representative doesn’t take place until the next Commissioners meeting on November 15th; Trey was present this week and joined his colleagues in talks regarding his upcoming ARPA committee, and heard from organizations seeking fund allocation.

His addition comes after former-commissioner Kathleen Zanotti was appointed to the position of Bay County Clerk, who had entered the role after the seat was vacated by Andrew Niedzinski in 2020 to become Vassar city manager.

In his free time- Pinkstock says he, his Fiancé, and their two dogs often go out for a stroll or bike ride… but he shared he’s in the market for a new bike currently.

Otherwise, he says his favorite pastime is hands-down a great round of golf.