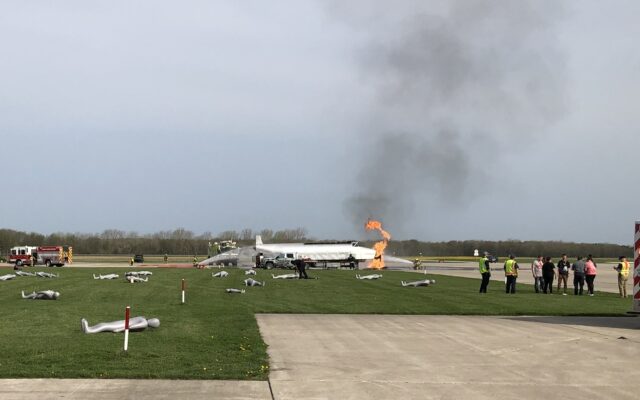 MBS International Airport held a disaster exercise this morning that involved the simulated crash of a commercial airliner.

The exercise simulated a crash involving a fuselage fire, fatalities, and injuries among the 70 volunteer and manufactured passengers and crew.

“This is an F.A.A. requirement. They want all airports that serve commercial air traffic to test out their fire response teams on a full-scale level, along with mutual aid response in order to learn from our mistakes and do better in case there’s an actual event- which we hope never occurs.”

Several Area fire departments, police agencies, air-ambulances and surface ambulances responded as if it were an actual incident to show how they would deal with a real crash and to learn from the experience.

The exercise was drawn up and coordinated by Canders and Emergency Services Director Lt. Mark Pryzbylski from the Saginaw County Sheriff’s Department with several weeks of planning.

Lt. Pryzbylski assessed the exercise as a success, adding that local police, and EMS responders were among the many other moving pieces highlighted during the response.

He said “There’s a lot of moving pieces with an excercise this large. We had Fire, Law Enforcement, and EMS personnel from two different counties. There’s a lot of coordination that happens. Personnel from Covenant, St Mary’s hospital, and McLaren also participated. It went very well.”

While the training was initially geared towards how the airport and fire crews would respond,  Airport Safety Director Ryan Delong says a fire in an aircraft fuselage is different from other situations fire departments may be more commonly versed in.

“Fire suppression and ventilation tactics are varied for an aircraft fuselage versus a structural case, so this does give Township-level or structural (fire) departments an opportunity to train on an aircraft simulation.”

For the exercise, crews used water to knock down the flames. In a real disaster they would have used foams which contain PFAs, and require a site remediation afterward.

While the site was busy with the drill, normal airport operations went on uninterrupted.