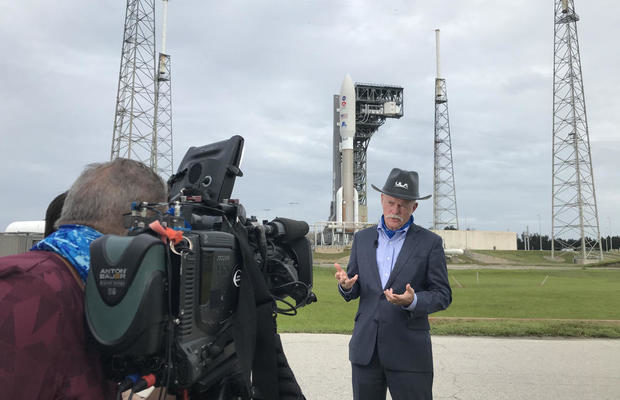 With good weather expected, United Launch Alliance engineers readied an Atlas 5 rocket for launch early Thursday on a multibillion-dollar mission to boost NASA’s nuclear-powered Perseverance Mars rover out of Earth’s gravitational grasp and onto a seven-month trajectory to the red planet.

“It’s all about speed, it’s about acceleration,” Bruno said. “Because we have this giant rocket … with a very tiny spacecraft, this thing is going to leap off the pad. When they say ‘ignition,’ do not blink, because you’re gonna miss it.”

Fifty-seven minutes after takeoff, after boosting the spacecraft to a velocity of nearly 26,000 mph — fast enough to climb out of Earth’s “gravity well” — the rocket’s Centaur second stage will release Perseverance and its interplanetary support stage to fly on their own.

Precisely aimed at a point in space where Mars will be next February, Perseverance will cap its arcing, 292-million-mile journey with a white-knuckle seven-minute plunge to touchdown in a 28-mile-wide crater that features the remnants of an ancient river delta and lakebed deposits that might preserve traces of past biological activity.

The rover is designed to search for tell-tale “biosignatures” in Jezero Crater and to collect rock and soil samples that will be sealed in small tubes and left on the surface for recovery by a European Space Agency rover tentatively scheduled for launch in 2026.

If all goes well, the samples will then be launched into Mars orbit by a NASA rocket, picked up by another European spacecraft and brought back to Earth in 2031.

While sample collection is the primary goal of Perseverance’s mission, the rover also is carrying a small experimental helicopter that will attempt to fly in the thin martian atmosphere — a first for planetary exploration — and another experiment that will attempt to extract oxygen from that mostly carbon dioxide “air.”

But first, NASA has to get Perseverance safely to its target, a journey that begins at 7:50 a.m. EDT Thursday when the towering Atlas 5, carrying Perseverance in a mostly-empty nose cone, lifts off from pad 41 at the Cape Canaveral Air Force Station. Forecasters predicted an 80% chance of acceptable weather.

United Launch Alliance, a partnership between Boeing and Lockheed Martin, has launched 84 Atlas 5s since the rocket’s debut in 2002, all of them successful. Despite the booster’s near-flawless record, Bruno said he takes nothing for granted and feels a “heavy” responsibility for getting Perseverance safely on its way.

“All of our missions are really, really important but this one even more,” he said. “There was so much that was put into preparing this spacecraft, thousands of people worked on it. But it is also the beginning of a series of missions that will eventually return samples to Earth.

“So that weighs on us and is ever present in our mind. … It’s a tremendous responsibility. We’re obviously humbled that we are entrusted with that, and we do our very best to make sure we do everything we can to make this successful.”

Perseverance is the third Mars mission to take flight in less than two weeks. The United Arab Emirates launched its Hope orbiter on July 19 and China launched an orbiter-rover combination four days later. The missions are the first interplanetary flights attempted by either nation.

NASA has successfully sent eight spacecraft to the surface of Mars, four stationary landers and four rovers. But Perseverance is the most ambitious Mars mission yet attempted, the first element in a multi-mission, decade-long program to bring martian samples back to Earth for definitive laboratory analysis.

“That will be the first time in history that we’ve done a Mars return mission,” said NASA Administrator Jim Bridenstine. “In fact, it’s the first time in history we’ve done a return mission from any planet. These are very, very exciting times, a very important mission for the United States of America. And, of course, a very, very important mission for the world.”