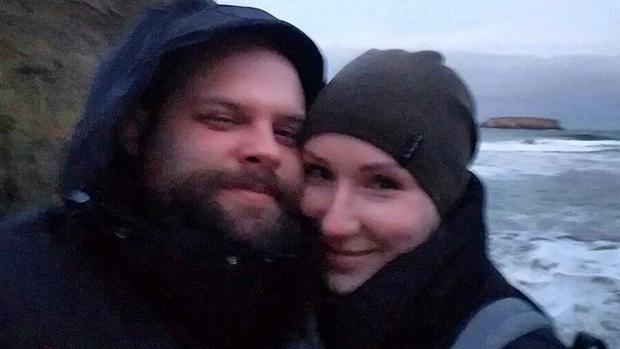 A Russian bride-to-be was found dead 5,500 miles from home. Investigators would soon learn Anna Repkina was unwittingly caught up in a love triangle and that her fiancé frantically researched time travel after her death, writing to strangers on WhatsApp: “… best friend made a mistake. I want to go back to keep from losing the woman that should be my wife.”

“The Murder of Anna Repkina” is reported by correspondent Tracy Smith in an all-new “48 Hours” airing Saturday, October 31 at 10/9c on CBS.

In 2016, Repkina was a 26-year-old Moscow native who loved rock music and cats and had a fun sense of humor. She had recently gone through a breakup with her boyfriend of seven years. In search of love, she decided to join some online dating sites. She thought she’d found what she was looking for when she met William Hargrove, a 26-year-old Oregonian who happened to have an affinity for all things Russian.

Their online relationship quickly took off, and Repkina decided to fly to the United States to meet her new love interest in person and spend the Christmas holidays with him in Oregon. After a whirlwind 10-day trip, Repkina returned to Russia with a souvenir — an engagement ring from Hargrove. She made plans to pack up her life in Russia, move to Oregon, and plan a wedding.

What Repkina wasn’t planning on was meeting Hargrove’s secret girlfriend.

When Repkina first met Hargrove, he was renting a room from a woman named Michelle Chavez, who was living with her husband in a loveless marriage. Unbeknownst to Repkina, Hargrove and Chavez were involved in a passionate affair even before she came to the states. Hargrove and Chavez continued their relationship after Hargrove’s proposal to Repkina, and when Repkina moved to Oregon to marry Hargrove, Chavez was shocked, and very angry.

Chavez wanted Hargrove to only be with her, and pressured him to end his relationship with Repkina. She issued an ultimatum — to choose between her and Repkina. Within days, Repkina was dead.

The day after Easter 2017, Repkina’s body was found on a remote logging road in Alsea, Oregon. She had been killed by a single shotgun blast to the back of the head. But who pulled the trigger?

That’s the question the lead detective, Lieutenant Chris Duffitt, was trying to answer when he first arrived on the scene. “We found several pieces of trash,” said Duffitt. “Fast food bags, cigarette cartons, candy wrappers that were here. And at that point, we don’t know what’s evidence and what’s not.”

One of the pieces of trash turned out to be a treasure. Investigators were able to trace the information found on a KFC receipt back to Will Hargrove.

In the days after Repkina’s death, Hargrove exhibited some rather peculiar behavior.

Hargrove went on a bizarre internet deep dive. “He is researching time travel,” said Detective Chris Dale. “He’s saved screenshots of web pages that show you how to do a particular spell to travel back in time. And we also see communication through WhatsApp in which he is trying to ask for help in how to travel back in time.” Hargrove said he wanted to correct a horrible mistake that his “best friend” made. He was so desperate to get this information on time travel that he offered his soul as a reward to strangers on the internet who might be able to help him.

In addition to his strange internet encounters, Hargrove was caught on video surveillance at various ATM’s withdrawing cash from Repkina’s account. “He made a $200 withdrawal from this machine, and then engaged in some conversation with some employees at that gas station, where he actually ended up hugging one of them and crying about the fact that his girlfriend, Anna Repkina, had left him,” said Duffitt.

Hargrove withdrew a total of $800 from Repkina’s account. With a sudden influx of cash, he made a car insurance payment, went shopping at Walmart for Star Wars themed LEGOs, and bought candy and cigars.

After connecting Hargrove to the crime scene through the KFC receipt, investigators brought Hargrove in for questioning and ultimately charged him with Repkina’s murder. The trash left near Repkina’s body, Hargrove’s strange internet encounters, and theft caught on camera led Hargrove to be formally indicted for his fiancée’s murder in July 2018.

But when Hargrove’s trial began in October 2019, the defense would spin an entirely new theory as to what happened to Repkina.