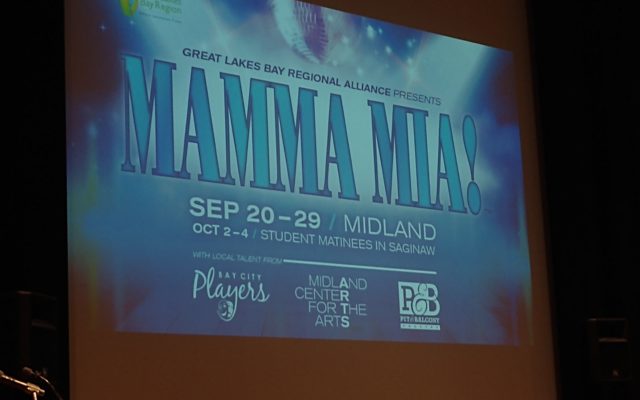 The Great Lakes Bay Region is host to several exciting events this summer. This fall, be prepared for another.

The Great Lakes Bay Regional Alliance has partnered with Saginaw’s Pit and Balcony Theater, the Bay City Players and the Midland Center for the Arts in a first of its kind collaboration to present the hit Broadway musical Mamma Mia which features the music of the 70’s disco group ABBA. It’s the story of a soon-to-be bride on a Greek Island who invites three men to her wedding, each of whom may be her father. The musical ran on Broadway from 2001-2014 with more than 5,000 performances.

The licensing rights, released last year, mean the show will be picked up by theaters across the country. Instead of doing individual productions, the three theaters decided to work together. The show will be performed at the Midland Center for the Arts Center Stage Theatre  September 20-22 and September 27-29. It will then be held at the Pit and Balcony October 2-4 with free matinees for school students. The Bay City Players will host workshops throughout September to spark interest in the play, with Cabaret Nights sneek peaks on September 5-6. Isabella County will be represented with on and off stage talent.  The play will be directed by Tommy Wedge.

Tickets go on sale June 27 and can be purchased here, here and here. For further information, visit www.greatlakesbay.com.