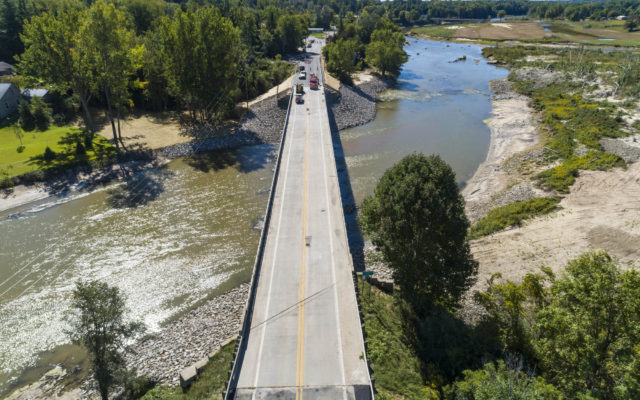 Crews complete the final touches ahead of reopening M-30 over the Tittabawassee River to local traffic on Thursday, Sept. 17. (source: MDOT)

The Michigan Dept. of Transportation released the following on Thursday, Sept. 17, 2020:

Following a 500-year flood in May, MDOT and local road agencies closed nearly 30 roads and bridges across the region. Among those closures are two M-30 bridges spanning the Tittabawassee River in Midland County and the Tobacco River in Gladwin County.

Since the initial flooding, two emergency contracts have been administered to restore M-30 over the Tittabawassee River. In late June, MDOT entered into a $1.4 million debris removal contract, allowing for removal of road and bridge fragments, trees, and other debris from the M-30 site and placing rip rap at exposed pier footings. The contract also included removal of the remains of the flood-ravaged M-30 causeway bridge further north.

Following debris removal, MDOT administered a second emergency contract to restore the existing structure at the Tittabawassee River. The original bridge, built in 1947, will need to be replaced in the future. MDOT prioritized the need to restore mobility to the community immediately. Work began under the $1.2 million emergency contract in early August and included stabilizing the south bridge abutment with additional concrete and placing rip rap and grout at both abutment walls. Backfill was added at the exposed south abutment wall, allowing crews to rebuild the road and bridge approach and replace the railing spanning the top of the bridge.

“I am thrilled to see the progress on this vital project, and I understand how difficult this has been for members of the community,” said Ajegba when he visited the bridge site. “Gov. Whitmer asked me to make restoring transportation access here a top priority, and we will not stop until all repairs are finished. I want to thank everyone for their patience.”

For the time being, M-30 will remain open at the Tittabawassee River for local traffic only. Emergency personnel, delivery trucks, school buses, and residents will be permitted to use the bridge, allowing access to several homes that have been isolated by the bridge closures since the May floods.

“We are so relieved to hear that this bridge is opening soon,” said Rachel Rivard, local resident and mother of four school-aged children. “We had concerns about first responders being able to reach us or our neighbors if there were any emergencies. Even something small becomes more concerning when you don’t know if the fire department or an ambulance can reach you. With the school year underway, our children are thrilled to be able to ride the bus to school again. This is a little bit of normalcy we have been needing.”

MDOT engineers expect to begin design immediately for a temporary bridge at M-30 over the Tobacco River, formerly known as the causeway bridge at Wixom Lake. Once a temporary bridge has been built, commuter traffic will be permitted on M-30 between Edenville and the Tobacco River crossing. MDOT has also secured FHWA approval to assist in administering emergency contracts to begin repairs on two local bridges impacted by flooding, the Curtis Road bridge in Edenville and the Saginaw Road bridge in Sanford. Work to secure contractors for both locations is underway.