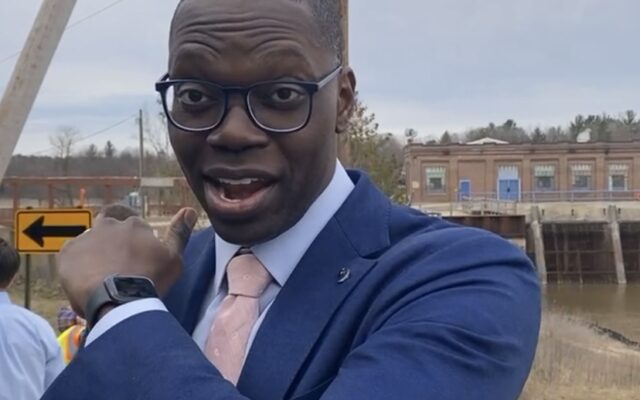 (April 11th, 2022). (Photo- Ric Antonio; WSGW) Lt. Governor Garlin Gilchrist pointing at Sanford Dam as work continues to restore it, the others up stream, and the rivers and lakes.

With the upcoming anniversary of the May 2020 Flood in mind, Lieutenant Governor Garlin Gilchrist made a visit to Sanford on Monday.

He says the bipartisan Building Michigan Together Plan includes some of the largest infrastructure investments in Michigan history, including $200 million to repair dams in Midland and Gladwin counties earmarked not only help them get back to normal, but to protect them in the future and while financially flourishing.

Also in that plan- $3 million to Midland County to create a water management plan related to flooding, $6.8 million for lake dredging and dam emergency spillway projects in Clare County, and another $40 million to address the repair, renovation, or elimination of dams statewide.

Click Here for the full live-streamed discussion and visit with Lt. Governor Gilchrist.