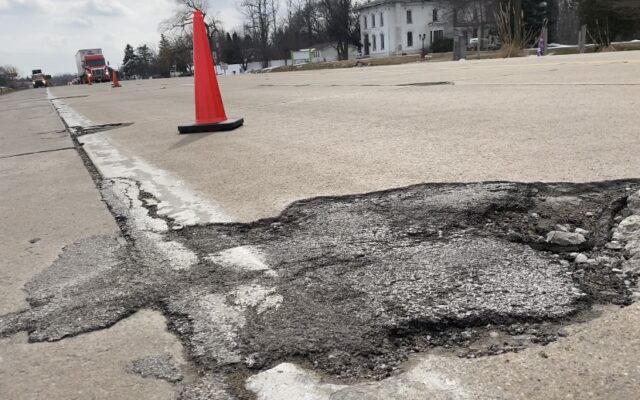 Michigan Lieutenant Governor Garlin Gilchrist stopped in Freeland to fill in some of those potholes around M-47 and Howley dr.

He joined MDOT workers who say they’ve been out almost every day re-filling the ‘biggest areas of concern’ that have been an ongoing issue since the 1960’s- the last time M-47 saw a full reconstruction.

The visit was meant to showcase an executive directive by Governor Gretchen Whitmer issued to expedite short-term road improvements during the spring thaw, until construction can start to make more permanent fixes.

The Lt. Governor says the upcoming budget proposed by Governor Whitmer will include an additional billion dollars (compared to last year) specifically earmarked for road repairs to get more work done, and done correctly.

According to MDOT officials in Freeland Wednesday- work being done by crews to fill areas needing major repair has been a never ending fight that will continue until a more permanent solution can be implemented.

They also said that the money Gilchrist is talking about can’t come soon enough because they’re getting just as fed up with filling potholes as Michigan drivers are with dodging them.

Since 2016, about $2.5 million have been invested in the stretch of M-47 running through Freeland for patches and repairs. MDOT says they’ve heard more complaints about the road since 2016 than they have in that same span of time leading up to it.

To date: the Whitmer-Gilchrist Administration has documented repairing 13,198 lane-miles of road and 903 bridges statewide.