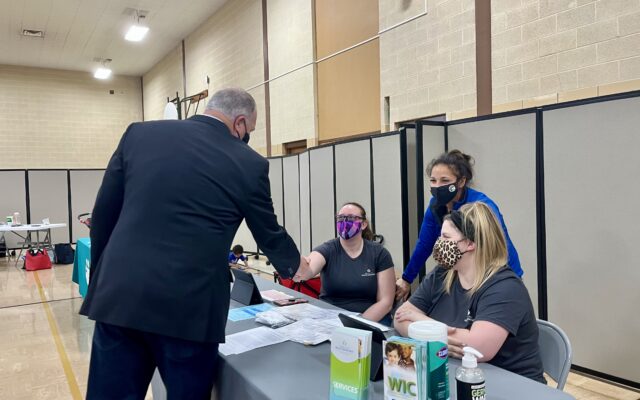 Congressman Dan Kildee has announced new bipartisan legislation designed to protect families from lead in drinking water. Kildee made the announcement at a lead testing event with the Saginaw County Health Department Wednesday.

The Get the Lead out of Assisted Housing Act would help protect families living in federally assisted housing from lead exposure by requiring the U.S. Department of Housing and Urban Development (HUD) to inspect for lead service lines, create a grant program for local and state governments to address lead contamination, and mandate that homes found to have lead paint be checked for lead in water.

At least half a million U.S. children ages one to five have elevated levels of lead in their blood, according to the Centers for Disease Control and Prevention. Health experts say there’s no safe level of lead exposure. They say its impacts are serious and long-lasting, especially for children, including behavioral, endocrine, and cardiovascular conditions, as well as learning difficulties and neurodevelopmental deficits.

“There is no safe level of lead, and the Flint water crisis taught us that we cannot take the safety of our drinking water for granted,” said Congressman Kildee. “Families in Michigan and across the country should be able to trust that they are safe from lead in their drinking water at home. My legislation takes an important step toward making that a reality by requiring water testing in federally assisted housing. Protecting families from lead in their homes is not a partisan issue, and I am proud to work with Republicans and Democrats to keep Michigan families safe from lead.”

“The Saginaw County Health Department has a long history of lead screening for children. We’ve done a lot of work in this space not only testing for lead but also counseling and educating families, following up with those who test high for lead, and helping to make the connections needed to fix the factors that put children at risk in the first place,” said Christina Harrington, MPH, health officer. “Prevention strategies like the one introduced by Congressman Kildee help remove lead from one of the most basic environmental sources—drinking water. This new focus and policy development protects families.”

Kildee’s office said The Get the Lead out of Assisted Housing Act would help protect families from lead exposure by:

The legislation is endorsed by the National Housing Law Project.