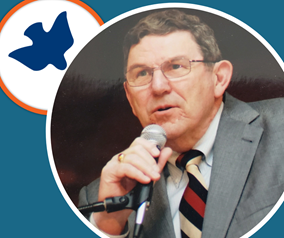 Bob’s 44 steadfast years as CEO at Catholic Federal Credit Union (Jolt’s former name) is a testament of his commitment to people helping people.  “Bob Adams is, was, and will always be the standard of how you treat each and every member, day in and day out. He never wavered from that,” said Robert J. Looby, chairman of the board. “He set a high bar for all of us to reach for. He will be missed but not forgotten.”

His legacy includes the countless of staff he mentored, the thousands of people he helped and touched, and his dedication to creating an atmosphere that maintained the dignity and sensitivity to all members. Alan Watson, CEO/President of Jolt Credit Union, took on his current role when Adams retired shared “Bob was one of the nicest guys you would ever meet. As the CEO at Catholic Federal, his focus was always on the members and assisting those in need. Speaking for all of us who worked with Bob, I can say it was an honor and privilege. Bob may be gone but his life’s work will continue.”

Adams retired in 2010 and loved spending time with family and absolutely adored his grandchildren. Besides working outside on those “Northern Michigan Days,” Bob enjoyed sailing, traveling, and meeting with “The Squad” at Riverside Restaurant.

Jolt is a member-focused and community active Credit Union who has been helping members build stronger, happier lives for over 60 years with easy-to-use banking tools.