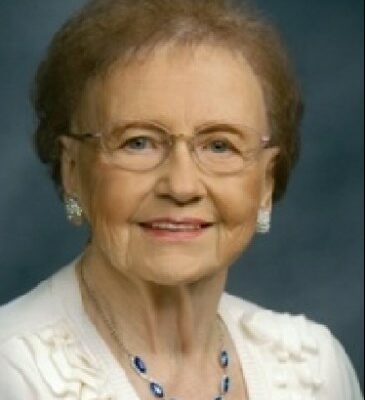 A well known Frankenmuth woman died Sunday at the age of 95.

Irene Bronner was born as Irene Pretzer on March 16, 1927 in Hemlock. She married Wallace “Wally” Bronner in 1951. That same year, the couple began the Bronner’s CHRISTmas Wonderland, though in the beginning, it was a small operation. Before joining Wally at Bronners, she taught at Frankenmuth Public Schools and in Buena Vista. Over the years, Bronners grew to the size and scope it is today at 25 Christmas Ln. in Frankenmuth.

Irene served on the store’s Board of Directors for many years, and filled in whatever roles were necessary within the Christmas store itself. The Bronners eventually gave up ownership of the holiday store in 1998 to their children, but stayed on to help out whenever necessary until Wally Bronner’s death in 2008.

A visitation will take place from 2:00 – 8:00 p.m. this Friday at Cederberg Funeral Home in Frankenmuth. Funeral services will be held Saturday at 11:00 a.m. at St. Lorentz Lutheran Church.