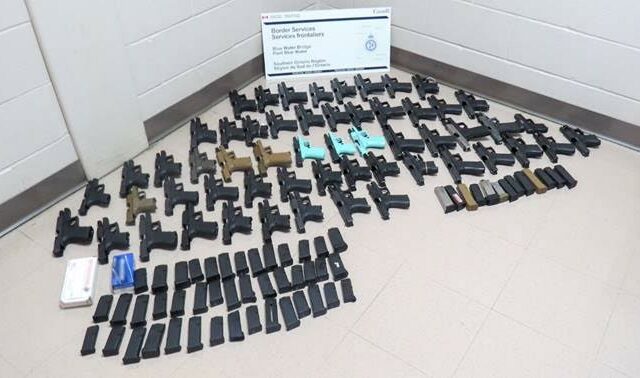 The Canada Border Services Agency (CBSA) Friday, November 19th announced one of the largest single firearm seizures in the Southern Ontario Region in recent history, with the interdiction of 56 prohibited firearms and the arrest of 48 year old Vivian Richards of Oakland Park, Florida.

The CBSA said on November 1, a vehicle was referred for secondary examination at the Blue Water Bridge port of entry in Point Edward, Ontario across the river from Port Huron, Michigan. During the examination, CBSA officers discovered 56 undeclared prohibited firearms,13 over-capacity magazines, 43 ten-round pistol magazines and 100 rounds of ammunition, located in boxes in the trunk of the car. All of the items were seized.

Richards was charged with several weapons charges. Her next court date is Wednesday, November 24th. The investigation is ongoing.