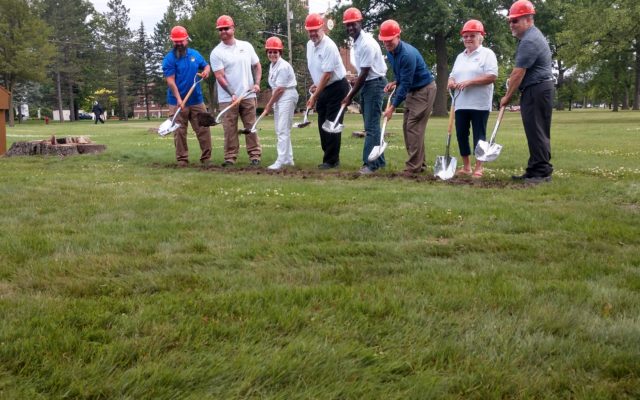 A new extension is coming to the Saginaw County Veterans Memorial Plaza.

A groundbreaking ceremony was held Monday, June 28 at 10:00 a.m. in Saginaw’s Hoyt Park to begin the addition of the Middle East Conflict and Future Wars pod, which will recognize Saginaw County service members who served in Iraq, Afghanistan, Syria and other parts of the Middle East, plus any future conflicts, families of service members and wounded service members. There will even be a place for the Space Force, the United State’s newest branch of the military.

The new work to the plaza will be made up of an additional brick walkway surrounding a new ten foot monument, designed by local artist and Marine Corps veteran Joe Pawlowski, with new landscaping and lighting.

The section, or pod, began as an idea with the memorial committee last fall. Marine Corps veteran and committee chair for the new extension Ryan Hageness says a lot of work has gone into the project, which is around $125,000. He says donations make up the bulk of the funding.

Anyone interested in donating to the project can make out a check to the Saginaw County Veterans Memorial Plaza, or visit the organization’s Facebook page to contact someone for information on how to donate online.