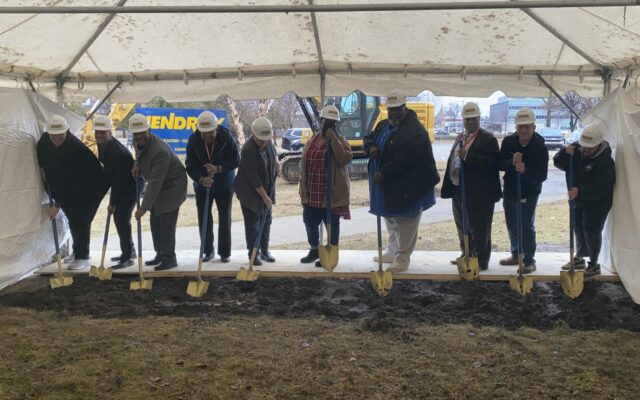 Located at the current Saginaw Arts and Sciences academy on N. Niagara st., the new school will combine students from across the area that could have previously opted for the soon-to-be-replaced Saginaw High school, Arthur Hill, Arthur Hill Technical Academy, and Buena Vista High school sites.

Saginaw board of education President, Dr. Charles Coleman, says the new United high school will get rid of old, fluctuating notions that any one of the schools is better than another.

He says the idea to combine the schools dates back nearly a hundred years when the Saginaw and East Saginaw districts originally combined as one entity in 1925, and potentially even earlier than that- citing the conjoining of Saginaw and the already once-consolidated city of East Saginaw and Salina.

According to district Director of Facilities Tim Furtaw at the groundbreaking event; after a contracting crew has been confirmed, work will begin immediately on digging to bedrock nearly 90ft underground to build a strong foundation for the 5-story school.

From there, Dr. Coleman says above-ground work will begin surrounding the current SASA site to prevent any student displacement as renovations are made at the current Arthur Hill building.

Dr. Coleman, as well as Superintendent Dr. Ramont Roberts in agreement with the rest of the district board, say the importance of the unification of the schools into one will not only help bring the community together but even bring more attention and job opportunities to the city.