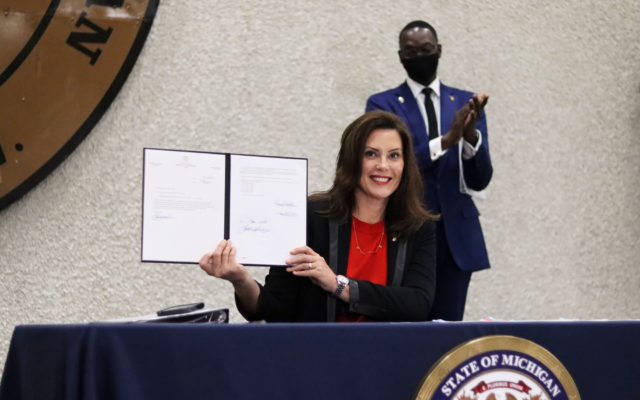 Source: Executive Office of the Governor
Gov. Gretchen Whitmer signed bipartisan House Bills 4980-4985 and 5120 Monday, reforming Michigan’s criminal expungement laws making it easier for people who have committed certain felonies and misdemeanors to have their record expunged. Changes in the bills include allowing a person to set aside one or more marijuana offenses if the offense would not have been a crime if committed after December 6, 2018  when recreational marijuana use by adults became legal in the state,  due to the referendum that voters approved to legalize marijuana in 2018. During her 2018 campaign for governor, Whitmer made expungement for marijuana convictions one of her key priorities.

“This is a historic day in Michigan. These bipartisan bills are a game changer for people who are seeking opportunities for employment, housing, and more, and they will help ensure a clean slate for hundreds of thousands of Michiganders,” said Governor Whitmer. “This is also an opportunity to grow our workforce and expand access to job training and education for so many people. I am proud to sign these bills today alongside Lieutenant Governor Gilchrist and many of the bipartisan leaders who worked on them.”

“This anti-poverty, pro-job opportunity Clean Slate legislation will reinvigorate the economic potential of hundreds of thousands of Michiganders whose records have hindered their availability to get a job or secure housing, and it will help us grow our workforce,” said Lieutenant Governor Garlin Gilchrist II.“This is the right thing to do on behalf of people everywhere who deserve another chance, and will help improve livelihoods. There is more work to do, but Michigan has now established itself as a leader in removing barriers to economic opportunity for people who have made mistakes. I will continue to stand tall for Michiganders across the state who need someone in their corner.”

The governor’s office said research conducted by the University of Michigan law school found that people who receive expungements see a 23% increase in income within a year.