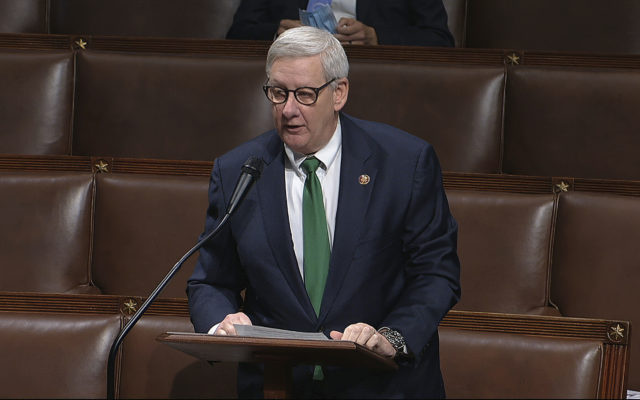 FILE - In this file April 23, 2020 image from video, Rep. Paul Mitchell, R-Mich., speaks on the floor of the House of Representatives at the U.S. Capitol in Washington. Mitchell, a former Michigan congressman who quit the Republican Party to protest GOP efforts to overturn Joe Biden's victory over Donald Trump has died. Mitchell died Sunday, Aug. 15, 2021, according to a statement his family provided to CNN. He was 64.(House Television via AP File)

Former 10th District Congressman Paul Mitchell has died after announcing two months ago that he had stage 4 renal cancer. He was 64. Mitchell, once a Republican, was elected in 2016, serving two terms in Congress and declining to run for a third term in 2020. The 10th District covers parts of Macomb and Tuscola counties, plus Huron, Lapeer, Sanilac and St. Clair counties.

Mitchell left the Republican party after the 2020 election, in response to claims by former President Trump and other Republicans that Trump won the election. Mitchell served the remainder of his term as an Independent.

Mitchell was the owner of Ross Medical Education Centers and a Michigan State University graduate.

Congressman John Moolenaar made the following statement on the passing of the former congressman:

“Today, I mourn the loss of my friend and colleague, and I offer my condolences to Paul’s wife Sherry and their entire family. Paul and I competed against one another, but we also quickly became friends, and I will always be grateful for his friendship and service to our nation. He always stood up for his beliefs, especially as the leader of the School Choice Caucus, and he worked hard to do what was right for Michigan families. I am heartbroken by Paul’s passing and know he will be greatly missed.”

“I am saddened to hear of my friend and former Representative Paul Mitchell’s passing. Paul and I had neighboring districts where we worked together to support sugarbeet farmers and protect the Great Lakes. While Paul and I differed on policy from time to time, we did not let our differences cancel our agreement nor our friendship. His passion for Michigan will be greatly missed. Jennifer and I extend our condolences to Paul’s wife, Sherry, and the entire Mitchell family.”

“Congressman Paul Mitchell was a fierce, independent voice for Michiganders. Throughout his tenure in the United States Congress, he led with his values and always spoke out for what he felt was right, even when he had to go against his own party, the president, or conventional political wisdom. After an incredibly successful career in the private sector, Paul entered public life, channeling his passion for people and innovative mind to help his neighbors and community succeed. He embodied values that we all aspire to have—he was independent, witty, and principled. Simply put, he was Paul, a joyful warrior for the people he believed in and for Michigan, the place that he loved. My thoughts are with Paul’s family, his six kids, six grandkids, his staff, and all those who were lucky enough to call him a friend. Paul, we will miss you.”