First Lady: Son Barron Had Coronavirus, But No Symptoms 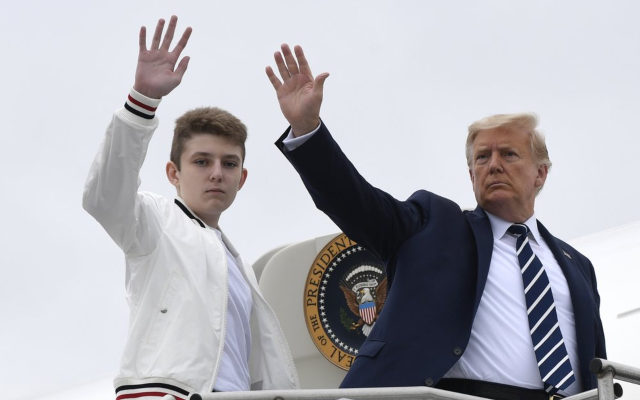 WASHINGTON (AP) — Melania Trump said Wednesday that her and the president’s teenage son, Barron, tested positive for the coronavirus not long after his parents, but had no symptoms. She made the revelation in a lengthy note chronicling her personal experience with COVID-19, including being hit with a “roller coaster” of symptoms that she treated naturally with vitamins and healthy food.

Mrs. Trump said she is now negative and hopes to resume her duties soon.

The president, speaking at a campaign rally Wednesday night in Iowa, was cavalier about Barron’s infection, saying, “He had it for such a short period of time, I don’t even think he knew that he had it.”

Mrs. Trump shared that after she and her husband first received their positive results, “naturally, my mind went immediately to our son.” She said she was relieved when he tested negative at first, but kept thinking about what would happen in the days to come.

“My fear came true when he was tested again and it came up positive,” the first lady wrote in a statement released to social media.

Sounding a bit like the president, the first lady said she was “glad the three of us went through this at the same time so we could take care of one another and spend time together.”

President Trump has called his bout with COVID-19, the disease caused by the coronavirus, a “ blessing in disguise.” He was hospitalized for three days and treated with various therapies and drugs, including steroids, supplemental oxygen and an experimental antibody treatment.

Mrs. Trump did not explain why Barron’s positive diagnosis was not made public earlier, but she has fiercely protected the ninth-grader’s privacy.

As for her own trials with the disease, the first lady said she was “fortunate” to have had minimal symptoms, “though they hit me all at once and it seemed to be a roller coaster of symptoms in the days after.”

She described body aches, a cough and headaches and said she felt extremely tired most of the time.

To treat it, “I chose to go a more natural route in terms of medicine, opting more for vitamins and healthy food,” she said.

The first lady praised the care provided by Navy Cmdr. Sean Conley, the White House physician, and his team, and said it was an “unfamiliar feeling” to be the patient.

“It was me being taken care of now, and getting first-hand experience with all that COVID-19 can do,” she said. The disease has killed more than 216,000 people in the U.S. and caused nearly 7.9 million infections here, according to the latest count from Johns Hopkins University.

Democrat Joe Biden has made President Trump’s response to the coronavirus pandemic an issue in the presidential campaign.

Most coronavirus patients suffer mild to moderate symptoms and recover quickly, typically anywhere from two to six weeks, according to the World Health Organization, though older, sicker patients tend to take longer to get well.

Mrs. Trump acknowledged her family was “fortunate” to have received “the kind of care that we did.” She added, “If you are sick, or if you have a loved one who is sick — I am thinking of you and will be thinking of you every day.”