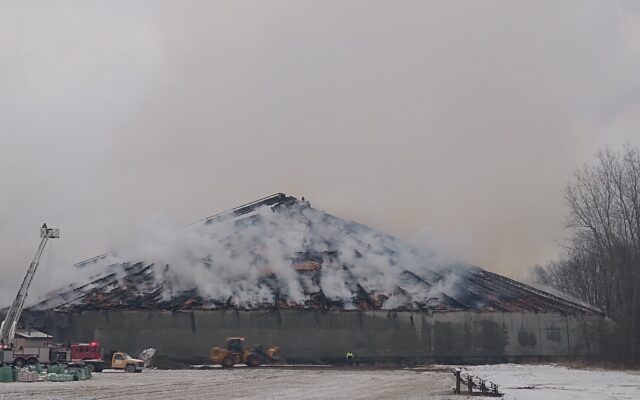 The fire at The Anderson’s Incorporated grain elevator that began Sunday night is now smoldering thanks to the efforts of dozens of fire crews and the support of the local community.

When residents of Richland Township awoke Monday morning to a blaze at a grain storage building, they didn’t hesitate to find out what they could do. Township manager Rob Grose says as early as 8 a.m. people were bringing pizzas, sandwiches, and water to firefighters on scene.

“We weren’t ready for it at that point,” said Grose. “We didn’t have a site set up to take in the food. One of the firefighters’ wives put a comment on Facebook to slow it down and try to coordinate it with the Township Office here so that we could time the dinners, lunches, and the food properly for the firefighters while it was still hot.”

As crews from around the state responded, the Rauchholz Memorial Library began to compile a list via Facebook, marking as many as 80 Michigan fire departments with pins on a map.

According to Grose, they stopped accepting donations late Tuesday as operations were scaled down. He says firefighters will stay on scene for the next few days until it can be turned over to The Anderson’s, who may be able to salvage some of the corn.