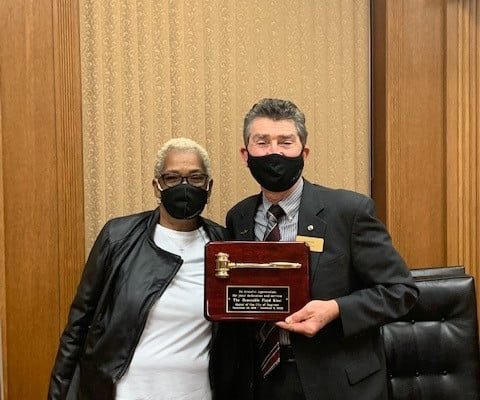 Mayor Floyd Kloc announced he would not be seeking reelection this past July, and Monday marked was his last city council meeting before retirement.

Kloc has been with the city for 18 years- serving as city attorney for more than 9 years in the 90’s, and 9 years on council after being elected in 2011; then voted both Mayor pro-tem in 2016 and Mayor in November 2018 by fellow council members.

The meeting was the first council had held in-person in months, after state orders on social distancing during the COVID-19 pandemic.

3 members of council attended remotely, with 6 attending in-person separated by plexiglass barriers. Attendees and staff were also spaced out in the crowd.

As a parting gift, he received a Gavel plaque with well wishes from city council and staff. Before wrapping up, he thanked everyone on council he had the chance to serve with.

Kloc’s seat on council will be 1 of 5 up for election this November 3rd.