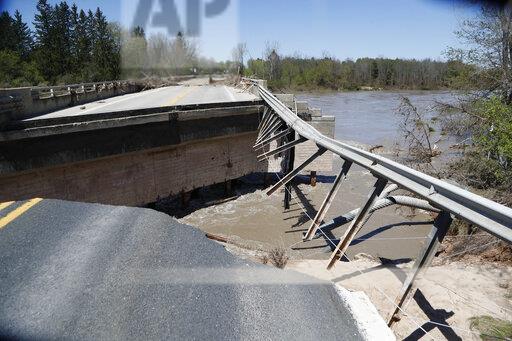 Damages are seen on one of two North M-30 bridges on Wednesday, May 20, 2020 in Edenville, Mich. After two days of heavy rain, the Edenville Dam failed and flood waters rushed south, ravaging the landscape in its path. (AP Photo/Carlos Osorio)

The Michigan Department of Environment, Great Lakes and Energy, known as EGLE, is hiring a senior environmental engineer to act as a third inspector in its Dam Safety Program. Besides adding the inspector, EGLE said it continues to evaluate the need for changes in the Dam Safety Program as it awaits recommendations from two outside evaluations that are expected to identify reforms.

The two reviews are being performed by the Association of State Dam Safety Officials and the Michigan Dam Safety Task Force. In June, EGLE  announced a team of six independent experts who will perform an independent forensic investigation of the contributing factors that led to the failures of the Edenville and Sanford dams in May in mid-Michigan.The investigation is expected to take up to 18 months to complete.

EGLE will post updates on the investigation on its Edenville Dam Failure webpage, which includes an interactive map of all state-regulated dams in Michigan:    https://www.michigan.gov/egle/0,9429,7-135-3313-529696–,00.html

EGLE officials said Boyce Hydro, the owner of both the Edenville and Sanford dams, has not been cooperative with the investigation, for which it is legally obligated to pay.