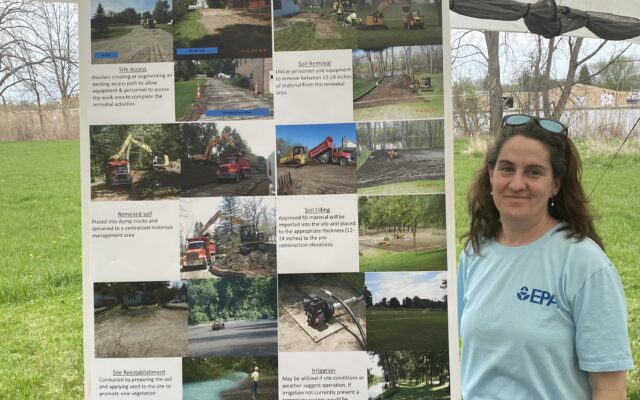 Officials with Dow, Michigan’s department of Environment, Great Lakes, and Energy (EGLE), and the U.S. Environmental Protection Agency met on Middleground island in Bay City to give residents there an update on this summer’s Dioxin cleanup efforts.

Moynihan says “In 2018 and 2019, Dow started collecting samples on Middeground island- specifically samples on residential property. Based on those sample results, some properties had results that were above the cleanup goal.”

She says while there are certainly lasting effects of Dow’s historic release of Dioxins and Furans  into the Tittabawasee river, much of what has been found at the Middlegrounds is due to landfill-type dumping.

“What we ended up finding is that there is a connection of Dow’s previous historical release of dioxin and furans into the river. Ultimately Middleground island we believe is contaminated due to landfilling or dumping material onto this island.”

Dow will be preparing a staging area for materials and equipment along Evergreen Dr. in the next several days, north of the residential areas being treated.

Contract crews will be removing soil up to 2 feet deep across each approved property depending on the level of contamination shown in each sites test results.

Federal limits of Dioxin in soil have the chemical limited to 250 parts per Trillion.

On whether there will be other efforts in the area to treat dioxin contamination, Moynihan says “Middleground island is part of a larger Tittabawassee-Saginaw-Saginaw Bay superfund site, so there will be additional samples that will be collected along the Saginaw river.”

During construction, traffic flow on and off the island as well as along the river to Veterans Memorial bridge will be modified Monday through Saturday from 7am to 6pm starting June 1st.

In total, about 15 acres on the island are expected to be replaced.

Dow will be responsible for related costs to replace the soil as well as repairing and maintaining landscaping for the next two years after work is completed in October.

For a look at the facts sheet provided by the EPA in regards to the Middleground island cleanup effort you can Click Here: EPA Dioxin Cleanup Middlegrounds

For further information on the cleanup effort, you can visit the Tittabawassee River, Saginaw River & Bay Superfund Page on the EPA website.